Native Newspapers.—The Hawaiians are as much attached to newspapers as any newsmonger of old Athens was to the gossip of the Areopagus. Long since, the “Kumu,” “Nonanona,” and “Eleele” [Elele], have passed away. Then followed the weekly “Hae,” which was a great advance upon its predecessors, but the “Hae,” is now to be spoken of as among the things that were, and 1862 opens with the “Hoku Loa,” or “Morning Star,” a Protestant Religious Monthly, and a similar monthly issued from the Catholic Mission [“Ka Hae Kiritiano”]. Besides these, two rather ambitious weeklies are in the field, viz: “Ka Hoku o ka Pakipika,” or “Star of the Pacific,” and “Ka Nupepa Kuokoa,” or “The Independent.” The former is issued from the “Polynesian,” office, and the latter is published by Mr. H. M. Whitney, who seems determined that the Hawaiians shall have a weekly every way worthy of being called a “Newspaper.” The number for January 1st, is printed upon excellent paper, and executed in a style to reflect the highest credit upon the employees of the “Advertiser Office.” We sincerely congratulate the Hawaiians upon the rare treat which this paper will afford them each week during the ensuing year.

[I am posting this after coming across it because of a post last week by Nanea Armstrong-Wassel, seen here. It is interesting to note that the Friend was obviously not supporting the Hoku o ka Pakipika…] 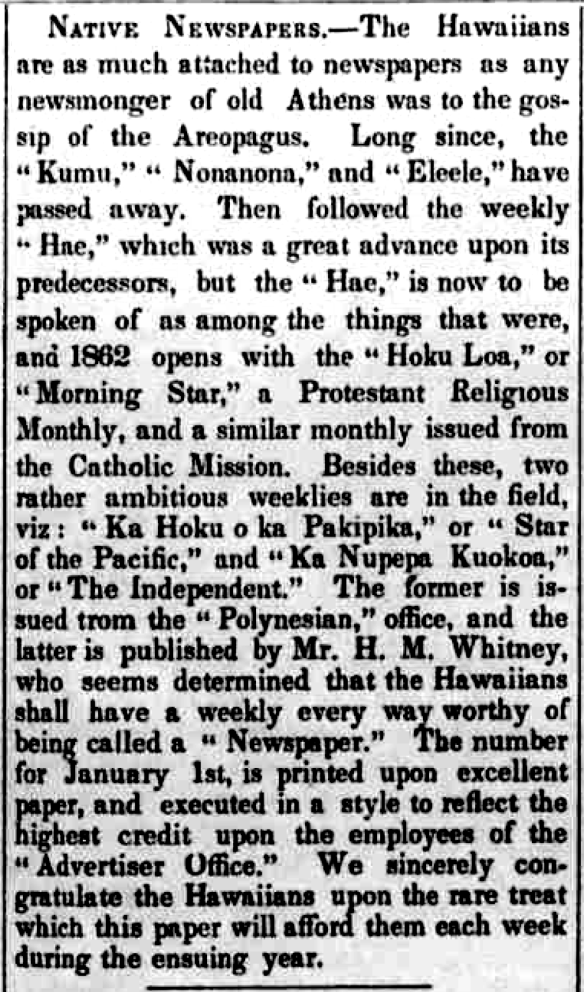