When King Kamehameha II made his last trip to Hilo, Hiwauli became somewhat of a wife, she became a wife of Haalou, one of the travelling companions of the King; when they returned to Honolulu, she was taken back by Haalou, and because the chiefs of the time knew the kupuna of her father, she was not seen as some stranger, and so she lived amongst them; but those who did not know, they questioned her living with and dining with the alii; she was enrolled into the school of J. Honolii by Chiefess Kamamalu to learn the alphabet, because she enrolled all her people with J. Honolii to learn the alphabet, but that school did not last long because the alii frequently travelled here and there.

When the King returned from Puuloa to Honolulu, they were there for perhaps not a month before Haalou died when the King commanded Kahalaia to execute him. Haalou died and Hiwauli lived without a husband for maybe a month, and J. Ii took her as a wife. And after maybe six months living together, the alii travelled to Britain, but before the King left, he appointed Ii as overseer of a ship, a ship sent from Britain for the King, sent by their King for Kamehameha I; so the two of them returned there to go to Maui then to Hawaii and then back to Honolulu, bringing back the tribute from those islands as commanded by the King.

The chiefs departed, and after that the two of them left the ship to live on land, and for a time they lived in Kaneohe, and when there was war on Kauai they were there, when it broke out in Wahiawa, and when those waging war fled, they went in search of the conquered by the order of the Commander Kahalaia, all the way to Kapaa in Puna and back to Waimea.

When Kalaimoku went from Wailua in Puna to Waimea, the two went along, and when the ship Paalua ran aground on Niihau, Kalaimoku went to repair the ship and they went along, and when the work was completed there he came back to Honolulu, and so too did the two of them. The two of them were not separated from the time they were married. They continued to be together yet with sinful minds, and for a time, one of the two was lead astray by other women, but Hiwauli was not overcome and did not leave her husband, for she did the right thing by setting things right with her husband. 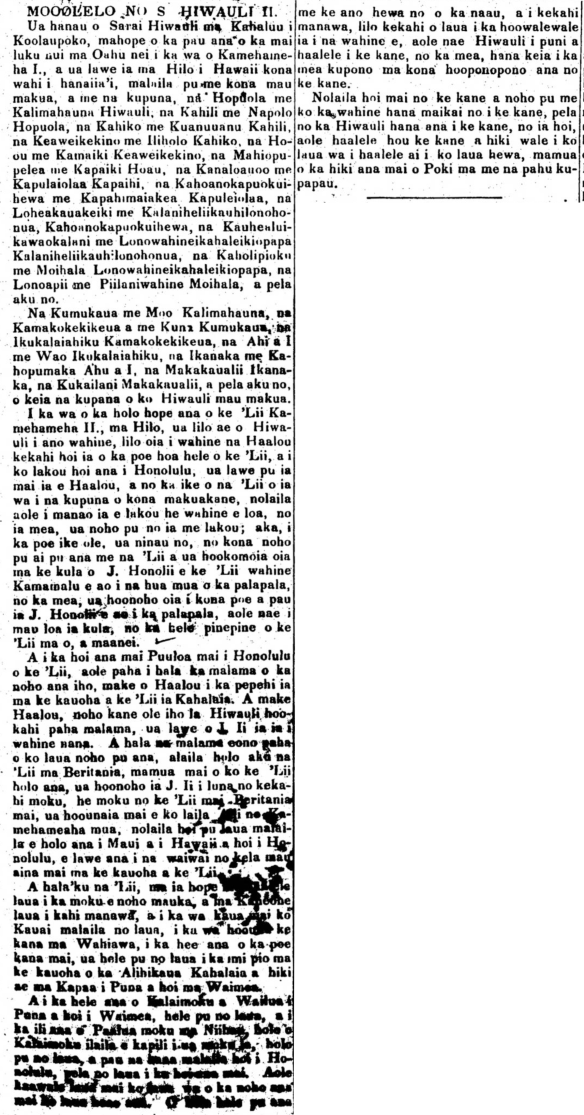