That fishy wireless from Kalaupapa which arrived here the day Pinkham expected to be reappointed, announcing his endorsement by the lepers of the Settlement, has brought the following repudiation. it now looks as if the “endorsement” had been a put-up job between Pinkham and one of his subordinates with the intent to deceive the Governor:

Having received work by mail of last week to this effect: That we, the leper inmates of Kalaupapa did meet and appoint a committee to extend by wireless our hearty endorsement to the Governor for the reappointment of L. E. Pinkham, Esq. as president of the Board of Health, on the 18th day of April, 1908,

Therefore, We, the undersigned lepers residing in the County of Kalawao, hereby wish the truth to be publicly announced, that there was, and has never been a meeting held here at Kalaupapa for such purpose on the date mentioned or any other date thereof.

Be it further announced, That Mr. Pinkham’s removal from that office receives our hearty approval.

We received your good tidings of the removal of our Hawaiian nation’s cut-head president with the greatest of happiness.

I have read your letter before the inmates (sick) of our Settlement, and we all join in rejoicing over the glad tidings, with one heart and soul. At the closing all shouted in unison, with joyful voices, that their best and warm aloha, and many thanks be extended to you, through me, for your prompt action in securing the best for your sick people over here.  For so doing, we all have come to the conclusion, that hereafter, you are to be addressed as the Guardian and the Mother of your nation. I am sorry that I cannot get a reply in time for the mass meeting as to that faked wireless, wherein it states that the Kalaupapa inmates ha sent word to the Governor, endorsing the reappointment of Pinkham. I am giving you my word of honor, no such endorsement ever came from us; in fact, we were all a happy crowd on the receipt of the news of his removal, and as evidence for this, you will find a note enclosed in this, signed by a number of the inmates to that effect.

You must work hard and patiently for the sake of your sick people over here, is all we beg of you, and may God bless you in your good work.

We understand that C. K. Notley, through his paper, is trying to get around Wallach again. Beware, do not allow it if you can avoid it. He has done Wallach dirt; he collected money form the people for Wallach, and instead of giving it over, he withheld the  money to his own use. When Wallach refused to obey him, he scraped the money together and said he would return it to the people again.

It has also been told us that it was he and his crowd that helped to imprison Wallach.

With aloha nui, yours truly,

P. S.—There are a great number of people who are anxious to sign this enclosed statement, but time is so short before the mail closes; if you want all the signatures of Kalaupapa, let me know and I will send the list next mail. 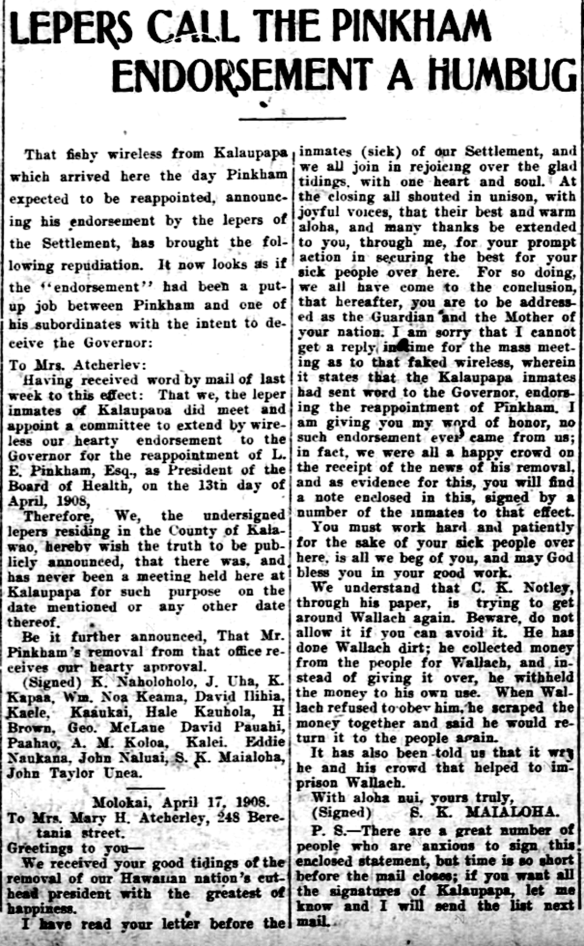