The excursion of the Governor to Maui.

On Tuesday, the 12th of July, the Governor and the Commissioner of Public Lands [Komisina Aina Aupuni] Edward S. Boyd on the Kinau and landed at Makena, Island of Maui, and they were treated very hospitably by Dr. Raymond of the cattle raising land of Rose Ranch, Ulupalakua.

And when they met up with the Government Land Sub-Agent [Hope Agena Aina Aupuni] Aiken, they began to climb to the uplands of Haleakala until they reached the peak; the Governor, the Commissioner of Public Lands Boyd, Dr. Raymond and Mr. Aiken.

They went up because the malihini wanted to tour the public lands of the Territory of Hawaii located in the famous mountain of Maui, to see the nature and the condition of the mountain lands and they kept going on until the spring of Polipoli.

And they returned to Makawao after exchanging their aloha with Dr. Raymond; the Doctor returned back to his place on Thursday afternooon; and the malihini went down with Mr. Aiken to the place of Mrs. Dora von Tempsky of Kula, and they had their midday meal.

On Friday, they went all the way to the uplands of Huelo, in the mountains to see and understand the nature of the mountain lands of those people under the guidance of the Sub-Agent Aiken. The Governor and our Commissioner returned, but it is not known what they did on the excursion they went on. 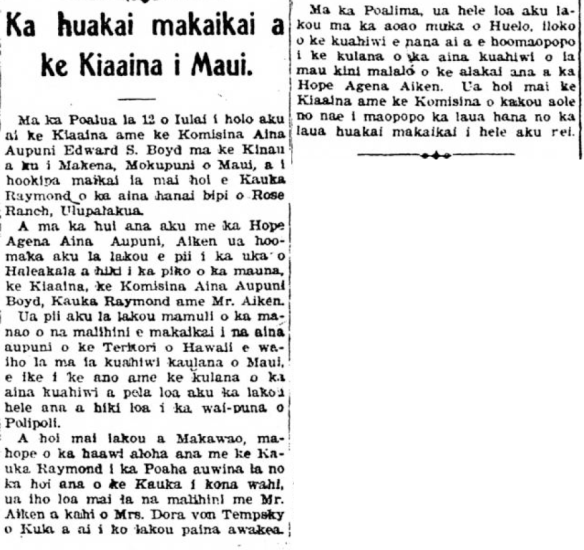