“MY (OUR) CHIEF INTEREST IS OUR CHILDREN”

—and Flora Hayes has proved it!

On the basis of no flamboyant promises does Flora Hayes seek election to the Territorial Senate.

Her record as President of the Hawaii Congress PTA, her record in the House of Representatives, in fact her entire life is standing evidence of her undivided interest in the children of the Territory!

As President of Hawaii Congress PTA Mrs.Hayes led the fight for larger, more adequate school appropriations. She was elected to the Legislature and during her service in the 1937 sessions she was active in the successful fight for more funds for rural and city schools, which resulted (among other things) in the two magnificent improvements shown above. Buildings are facts—not promises!

We who have known Flora Hayes practically all her life recognize her ability, her persistence and her personal charm and acumen that enable her to work with other legislators—to get things done! For this reason we respectfully urge the voters of Oahu to thank her by supporting her for the Senate where she believes she can continue to serve us all the more fully. 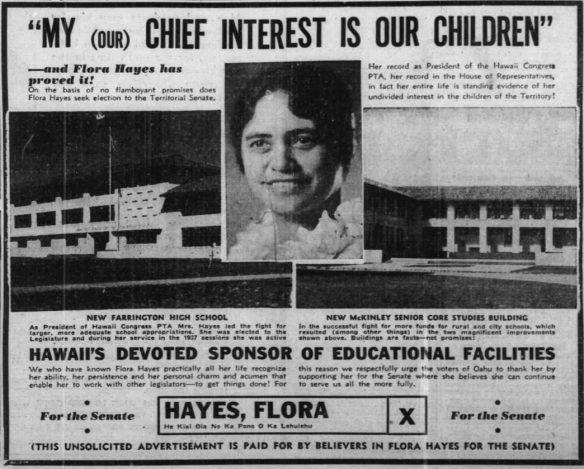