Davida from Kawaikapu, Molokai wrote thus: On the past 16th of April, in the early morning of that day, we went to go spear Turtle, outside of Honomuni, at the area where octopus is fished for [kai okilohee], and we spotted a Turtle, and then we went to a place a little away, from where we first were spearing, and then we saw a large Shark, but it did not approach us at that time, and then we went outside of Kupeke and Pukoo and Mapulehu, without thinking the Shark was coming to rob us, but while we were going merrily along, the Shark carried up our little canoe while chomping its teeth, and thrashing its head, and our little canoe flew high up above the sea, five feet from the surface of the sea. At that moment, we saw its head and its red eyes above the surface of the sea and our canoe overturned and sunk. Whereupon we were terribly terrorized, frightened in the ocean, thinking that it would bit us; however, it went on its way and did not come back to bother us, and not one of us were hurt by this fierce animal of the ocean; but our canoe was hurt; its skin was bitten, and was bruised by the teeth of the great shark, but I thought that it was angry at our small canoe, so it hurt it and did not hurt us; but through this, the grace of God for us was clear, in not giving our bodies into the mouth of the shark. 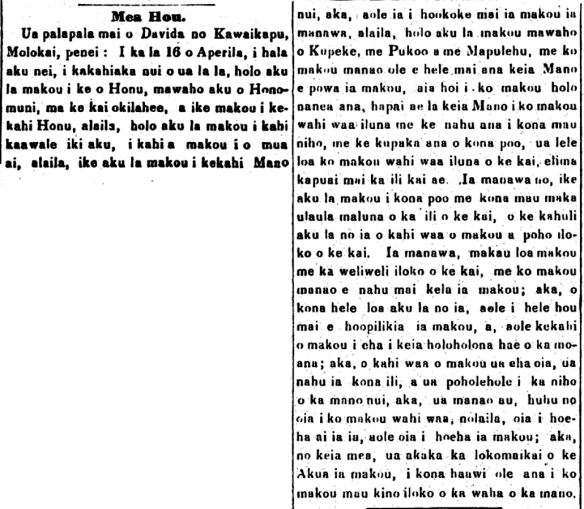