On the 25th of April, was the day I arrived here, and Small Pox [Hebela] had spread amongst the people here. Four people were cured, and one person named Kipouno Mangsia died. And when I arrived, there were three sick at that time.

By the loving request of the people here, I felt pleased and my heart was happy to stay for awhile with them here. After staying here for one week, there were many sick; seven new cases, totaling ten.

Just six days later, a man died. In the morning of Saturday, on the 3rd of May was when he went, and in the evening, we properly buried his body with sad hearts.

We were sent to Coloma by a person, and he came to check on the sick; and the people who were living were vaccinated.

Nine days later, Kenao was in dire straits, and so too was his adopted son Kamakea, who is part Indian and nearly 3 years old; we did not think that he would die, but someone approached where he was sleeping and he was dead! he was dead!! without us knowing when he died. Perhaps an hour later, the father followed after his beloved child. On Monday, the 12th of May, J. D. Kenao died along with his child. On Tuesday, we made a large coffin for the two of them, and we laid the child to rest in the bosom of his father, and that is how we buried them, with grieving and much aloha; however, we also were very joyous, for the two of them are blessed now, amongst the angels in Heaven. Their bodies were buried with the hope that they will rise once more—with glorious bodies.

Three days after, on the 15th of May, the wife of Mahuka died; she was a greatly appreciated Indian woman, and a devout woman. Her name was Waiuliuli. She had three children who are now living with their father.

And the next day, on the 16th of May, a man from Manigia named H. J. Ua died, and on that same day we buried his body along with Waiuliuli’s.

We terrified in fear of Jehovah; four days and a half, taken were four men.

Six days later, J. Hawaii died, on the 22nd of May was the day he died. This illness amongst us is not over, and more of us may die. It is up to God who is taken and who is left.

There is an Indian woman who is devout, named Mere; she was very sick for a week; she is blind and cannot see, and she almost is unable to speak; however, she has now totally recovered. 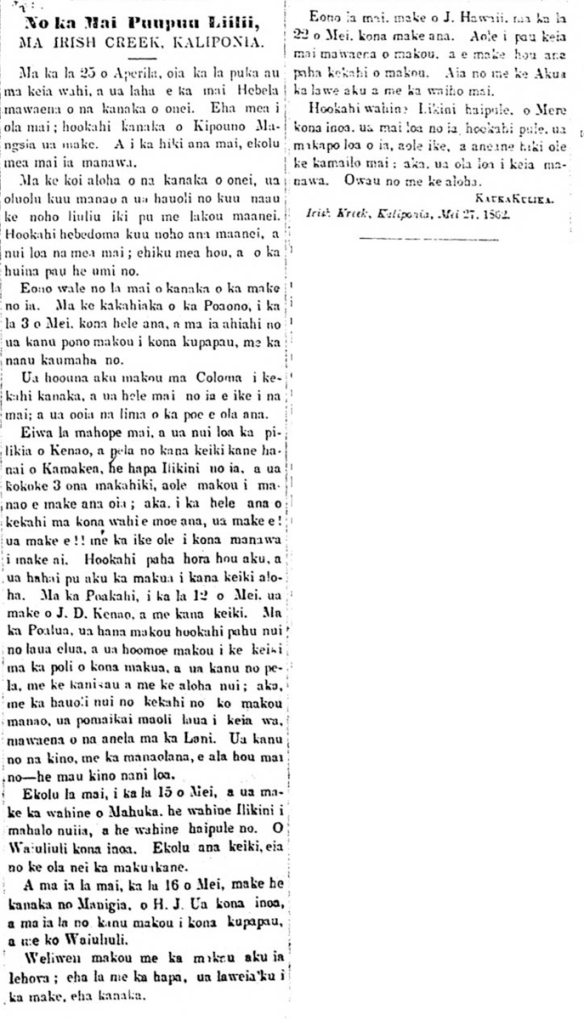