A little after 10 o’clock on the night of Tuesday last, the breath of Keoni Polapola left him, at his residence makai of Honuakaha, Queen Street. He was seen that afternoon in good health, and as it got dark, he started having a pain in his head until his death. His land of birth was Tahiti, and he lived in Hawaii nei becoming a citizen and kamaaina, and married a woman and had children. Aloha for him! 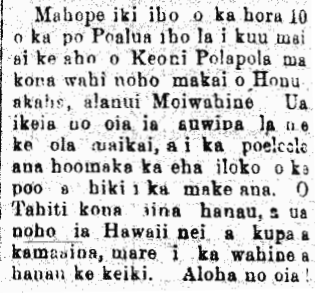