Pertaining to the Guano Islands.

Aloha oe:—On the 28th of Mei, 1859, we sailed from Honolulu, six days we spent at sea, and on the seventh day, that being the 4th of June, we saw Paukeaho [Jarvis Island], which looks like a very low-lying land; living there is Kale, Livai, and 50 men, who are guano workers. There was one trade ship docked, and three buoys to secure boats to, and a fine pier to transfer the guano; Kale’s men make fast work. He has 80 men. The eighty men can produce 2,640 bags per day. There is much food and water brought from Honolulu aboard the “Josephine,” a speedy ship which makes 300 miles per day if the wind is good; if the wind is bad, 280 miles per day.

The land is a small land indeed; if you stand and look from one side, you can see the breaking of the waves. This is a very hot land like Kawaihae on Hawaii. The breeze coming from the ocean is what makes this land a little bearable. We spent a month on Paukeaho and then sailed to Puakailima [Baker Island], that being the second island belonging to Kale; we sailed on the 7th of July, and on the 11th of that month, we saw the first island of Mr. Sauilam; it looks white and is flat like Paukeaho. We left there and on the 12th of July we saw the second island of Mr. Sauilam. twenty or so men live there with their boss; they are guano workers. We left there for Puakailima, that is the land of Kale, and on the 14th of July, we saw Puakailima. At the time, we saw something new, a ship run aground from Britain which came for guano, but they did not get what they came for. They got stranded on May 17, that is when the ship ran aground. The reason for this was because all those aboard were drunk; the captain went ashore to see the guano, and when he returned, all the sailors were drunk. The Captain called out to pull up the skiff, but he it did not go up; the captain called once more, and that was when the ship ran aground. The body of the ship remains here at Puakailima. Those from the ship went back on the “Josephine.” 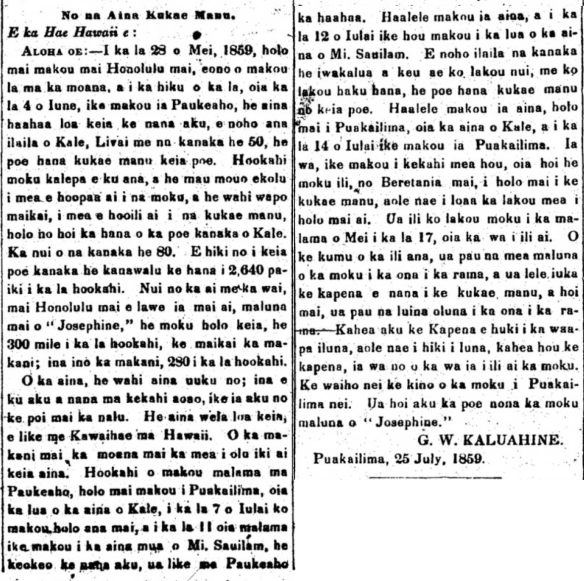