Steps Will be Taken to Preserve the Old Ruins.

In the course of his researches in following up the story of the massacre of the men from the Daedalus, and the myth of Kaopulupulu, Mr. Thos. G. Thrum has discovered a heiau, or Hawaiian temple, of the old days whose existence has heretofore been altogether unknown to island antiquarians although it is within easy reach from one of the main traveled roads on Oahu, and it would seem might have been found long ago. The temple, moreover, is in a fair state of preservation, and with little expense could be restored and kept as a typical worshiping place of the olden time.

The old temple is near Waianae Point, on the Waialua side, and within plain sight of the ridge although surrounded with a rather dense growth of lantana. It lies about four miles beyond the Haleiwa Hotel, and so could be seen easily by all tourists visiting that resort. Indeed, Landlord Bidgood of the hotel, who went with Mr. Thrum to find the temple has already agreed to have the lantana cleared away from the old walls, and steps are likewise in contemplation to preserve it.

“I was looking into the legend of Kaopulupulu, and also seeking for some light on the landing place of the men from Vancouver’s store ship Daedalus, who were massacred in 1792,” said Mr. Thrum yesterday, “when I found the old heiau. the legend of Kaopulupulu I exploded. If you will look at Thrum’s annual for 1904,  you will find on page 107 this: ‘At early dawn Kaopulupulu arose and partook of food till satisfied, after which he prepared himself for the journey before him. As he gave his farewell greeting to his household, he set toward Punanue, where was a temple for priests only, called Kohokuwelowelo [Kahokuwelowelo].'”

“I did not believe that there was any temple exclusively for priests in the region described,” went on Mr. Thrum, “but there are temples at Waianae, and so I looked for one there and found this. As for the Daedalus massacre, the story goes that the bodies of Lieut. Hergest and Mr. Gooch, killed by Koi’s people, were taken to a temple somewhere inland. But i should say it was probably to the temple on the flat above this one, as it was a larger and probably more important heiau.

“One peculiar thing about the temple, is that the corners of the walls seems to have been torn away. The native who showed me the place, although the matter had not occurred within his memory, told me that the stones from the temple were taken by workmen to mend the road below. This is a rather strange statement, for the reason that there were other and better stones for the purpose closer at hand. It seems to me more likely that the walls were thus thrown down to mark the entire abandonment of the old idol worship, and the ascendancy of the new religion.”

The dimensions of the celebrated Kawaihae temple [Puukohola] on Hawaii are 224×100 feet, while the new one found by Mr. Thrum measures 266×110. 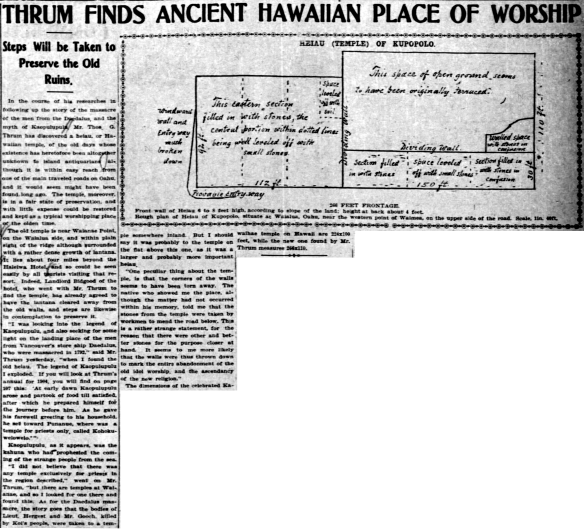