The picture above is of Mary Mahiai, a Hawaiian woman who is ninety years old or more. Last week, she was called to court over land that is being fought over. Here, her story was heard. Because of her good story and her long life, one of our writers went once again to ask her about her history. And this is it:

I don’t know when I was born, but I was born before the arrival of the missionaries. I was very small at that time, and maybe I was this tall. One day, we boarded a canoe, her Uncle and five others; they wanted to visit Molokai. They were caught up in a storm in the middle of the ocean, and blown outward; they did not eat for ten days and nights. Because I was so young, I cried a lot. I wanted to eat, and I was thirsty. We had nothing to eat, and had no water left. Water came in the waa, and some of us drank the bilge water. We were near crazy with hunger and thirst. We lost hope that we would live. One day we spotted a ship. We tried to get noticed. We were fetched and taken aboard the ship. My duty aboard the ship was to care for the children. The captain and his wife were kind. We landed at Lardone [??]. Five of them got off with the intent of living there. We heard that they were eaten after that by the people this place. My uncle and I went all the way to China. I cared for the baby some missionaries, Mr. and Mrs. Brown. Thereafter, my uncle died and I was left alone with those haole. I was the caretaker of the baby. I lived for perhaps six whole years in China. I travelled around many places. Later, Mrs. Brown died. I lived with Mr. and Mrs. Bates. After that he wanted to go to California to prospect for gold. We accompanied him on a boat, and saw Cape Horn [Kepahoni], that place famous for rough seas. I saw many lands. I lived for three months in the gold fields. I wanted very much to return to Hawaii. Afterwards, these haole agreed and we all left for Hawaii nei. When we arrived, I immediately wrote to my parents and younger siblings. They came to Honolulu at once. They believed that I had died earlier. My father died without me knowing him.

When they left, they wanted me to return with them but I remained with my haole parents. She [Mary Mahiai] was married four times and four husbands died before her. She spent some months with some, some years with some, and this last one was with her for twenty years, and he just died. She is still strong. She makes a living washing clothes for haole people.

The picture in the middle is what she looks like now. The picture on the left is them on the waa. The boat is spotted. Below that she is caring for the baby on the ship. On the right is them landing at the place gold was dug for. Below that is her reuniting with her family in Hawaii after disappearing for almost fifteen years. She left at seven years old and returned a mature woman. She lives on Vineyard Street in between Fort and Nuuanu Streets.

[See my later post of the article from which this was translated (and summarized), which appears in the Pacific Commercial Advertiser on a day earlier, July 25, 1901.] 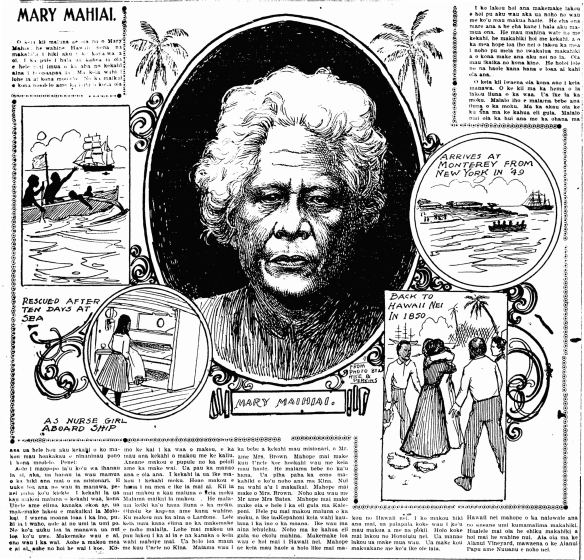