THE BOY THAT WAS

THE FIRST MAN TO SHOOT THE BEAR GOD GREATLY FEARED BY THE INDIANS—AS WELL AS THE TERROR OF THE WHITE SKINS–AND THE MASSACRE OF THE THEATRICAL GROUP OF LEE.

When the first brown skins were first contracted on Whaling ships, a man named Akamai boarded and their ship left for the Arctic [Atika] where that kind of huge fish lives to this day, that being the Whale [Kohola].

When their ship was let go in fair winds, and in the middle of the night, while everyone was enjoying their sleep, there was one of them awake then, that being the man who was bent over the oar of that ark of theirs.

While he was crouched over the oar of their ark, that little ship of theirs came upon a storm, and all the gear was blown away by the wind and the masts were snapped and the oars were broken; and because of this storm they ran into, they couldn’t do a thing; all they could do was to sit calmly looking out for land or a ship to save their lives.

While they waited for their end, and when the rays of the sun burst forth, their souls were gladdened to see that they had landed on land; they jumped off to land, and wandered about here and there, and as they wandered around… 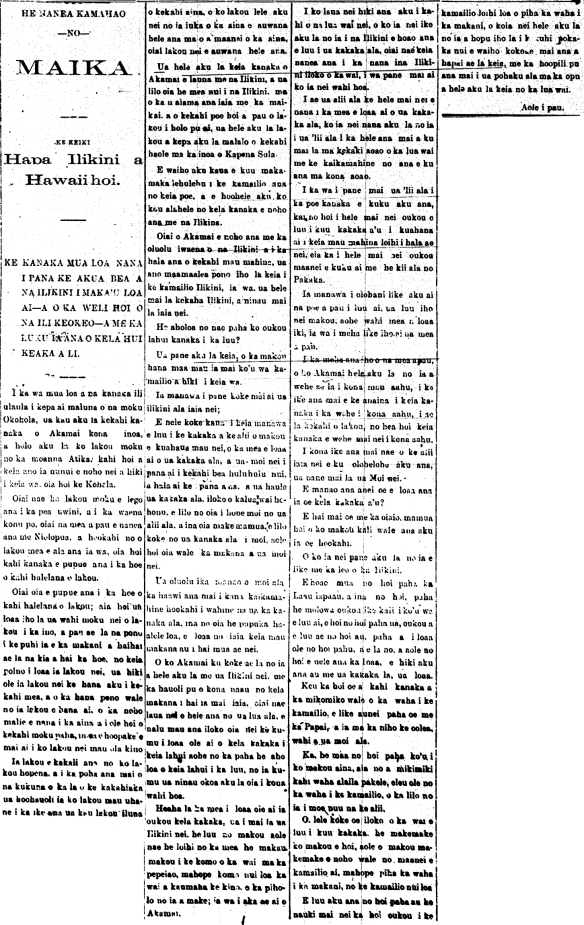