Those words are proudly placed above. Kaanapali’s fish have returned; so that our friends from Hawaii of Keawe to Kauai of Mano will know the news of the seasons. In this year that we are living, the native fishes of that land have come once more. They being the Kawakawa, Opelu, Muhee, Nehu. These fishes were observed right before the death of the dearly beloved Haku o Hawaii, our rose blossom that is no more. And these days, the men, women and children have come out in great numbers, leaving the villages bare, and the sands of Mahuehue are teaming with people; after the sun starts its decline, the Kawakawa are seen leaping beyond the reef, making it look white like waves. The people cheer with much joy, for the fishes have been gone for twenty years, and were seen again for the first time. So the people seeing these fish for the first time are filled with the warmth of aloha, and according to them, this is the fish that will bring pain to women [?? o ka ia ka keia e eha ai ka wahine] and it would appear to be so. And during those days, Opelu, Nehu and Squid were brought up to shore. The hungry ones of Kaanapali were saved.

[Ka Haku o Hawaii, dies on 8/27/1862. I have previously only heard of alalaua appearing in great schools before the death of an alii.] 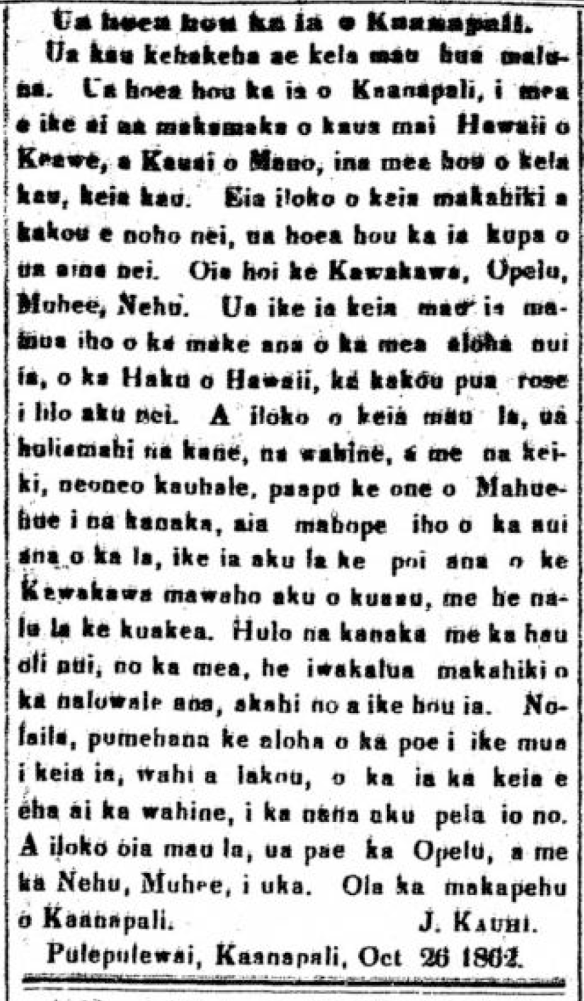