TO SPEAK FOR SPEEDY ANNEXATION.

William Brewster Oleson of Hawaii Talks of the Situation at Home.

William Brewster Oleson, principal of the Kamehameha (Hawaii) Manual Training School, was in the city yesterday on business. He left Honolulu four weeks ago to transact private business. Before returning he will go to Washington to do what he can to create a sentiment among Congressmen in favor of annexation. Mr. Oleson said the annexation movement is practically unanimous; that Claus Spreckels’ opposition is based on purely business interests, for if the islands were annexed to the United States coolie labor would be done away with and the cost of growing and making sugar would be greatly increased. Spreckels has a contract for all the sugar grown on the islands for half a decade. His policy may be summed up, says Mr. Oleson, in three of his (Spreckels’) own words: “Wait five years.” Referring to the presentation of a cane to Mr. Spreckels by a party in Honolulu recently Mr. Oleson declares that the incident signifies no defection from the ranks of the annexationists, since none of the alleged prominent citizens ever has been identified with the movement. He says some of them are mere political adventurers, while not one of them is a merchant as represented, prominent or otherwise.

[Just because something is stated out loud doesn’t make it true. Oleson probably thought he was a very stable genius.] 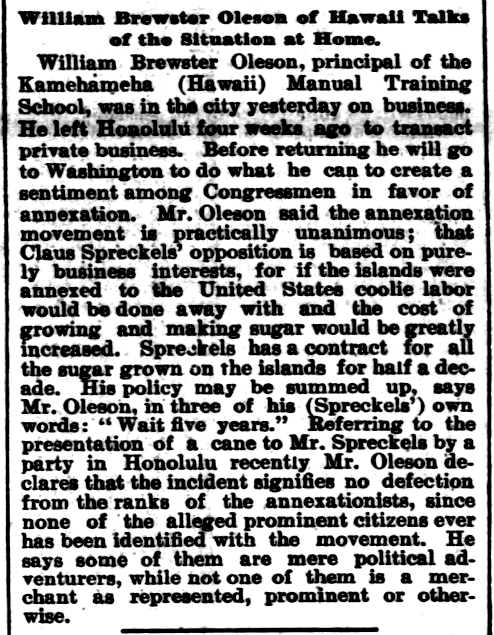