THE WORLD IS STILL IN THE DARK ABOUT HAWAII.

Although there has been so many stories heard talking about Hawaii and its people and its many wonderful things, in no way has the ignorance of some people in foreign lands about Hawaii been cleared; they assume Hawaii is an uneducated land and that we are cannibals.

On the return of someone who went to visit the fair in Seattle [Alaska-Yukon-Pacific Exposition], he spoke about the arrival of a haole woman who didn’t know about the conditions of Hawaii; and she put before the Hawaiian girls a great number of questions—questions which made it plain that she had no clue about this era of education here in Hawaii.

When she saw a pineapple, she didn’t believe that it was real, because she poked at it with her finger, perhaps thinking that it was just some decoration, or perhaps butter [butter sculpture seems to have been popular at the time].

When she approached the area where the Hawaiian girls were stationed to talk about Hawaii nei as well as to give various performances, she asked one of them:

“We are all Hawaiian girls,” she was answered kindly and very politely.

“How long has it been since your arrival here?” She asked next.

“This is our fourth day here,” she was answered again, with a pleasant voice and decorum.

“Your English is quite good. Where did you all learn it?”

“Upon our arrival here, we tried learning this language.”

“Is that so. And where did you all get your clothes?”

“We got it here in Seattle; we purchased it.”

“I thought that maybe you all don’t much wear clothes in the Hawaiian Islands; but you all still are cannibals, right?”

These girls could not endure this any longer after those last words of that malihini woman; they were very well appreciated for their etiquette, pleasantness, and their entire conduct which would receive no criticism from the visitors; however, with this woman, they were asked questions that they could not fathom, and that woman perhaps was close to being railed at were it not for the arrival of Will J. Cooper who advised the woman to go and look at the fish located in a different area. 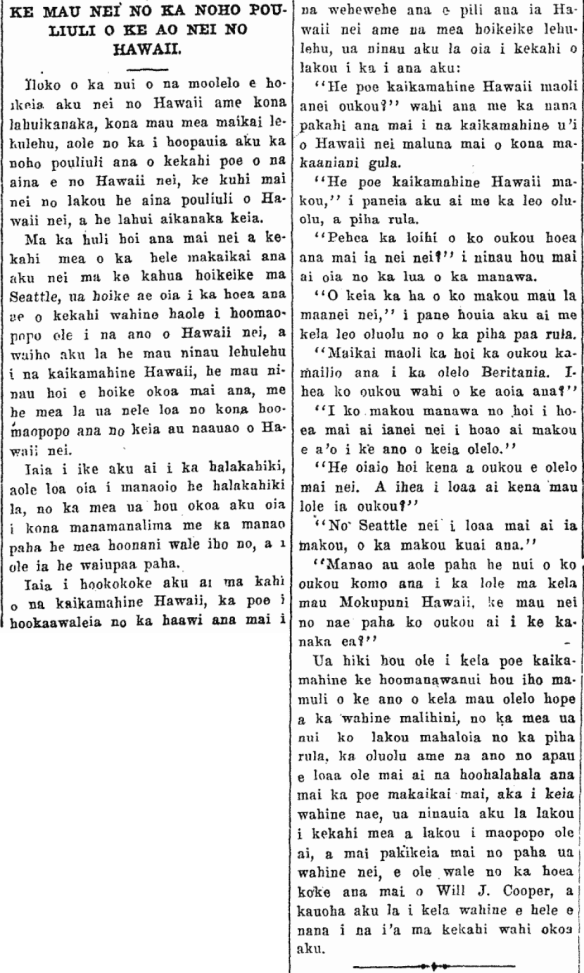