At Waiakea Kai, Hilo, an old man just died whose name was Kaa kea, on Thursday last, at 110 years old. It is not exactly known when he was born, however, he stated that he was 30 years old when Kamehameha I died. He joined in the battles of Kamehameha I, and at the last battle in Kona. At the death of the king, he slashed a mark like a moo on his forehead, and he lived with this mark until his death. 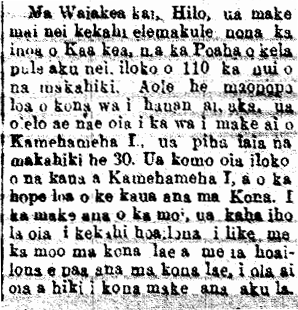