For some time I have been promised a story from Worth O. Aiken, popular kamaaina who, because of the many trips  he has made to the summit crater in Hawaii National Park areas on Maui, was long known as the mayor of Haleakala. And here it is:

Recently Mr. Aiken was speaking of the weird boundaries which old land holdings, sometimes called a kuleana or an ahupuaa, meet up with in the Islands. For instance the abstract to his farm on Maui, which he was checking up on a few days ago, covers 189 typewritten pages and goes right back to the original mahele or division of the land by King Kamehameha III in 1848. Up to that time the kings and chiefs owned everything, and after thattime the common people were able to ob-…

…tain title to the little plots and homesteads upon which they had lived and toiled for centuries.

Mr. Aiken was intrigued by many peculiarities of boundary descriptions in the early surveys of the old land grants, his own property lines running from a rock to a kukui tree, thence following a foot-path, etc. While government land agent on Maui, he was out with Sam Kanakanui, one of the Government’s most expert surveyors, going over boundaries of the Olinda homestead tract above Makawao, and he noted one point where the line suddenly left the usual gulch edge and ran across a deep little gully up the sloping hillside, and, then back to the gulch side lower down. Mr. Kanakanui explained the mystery thus:

“You see, Mr. Aiken, when the first surveyor was running that line down the mountain in early days, he told his Hawaiian rodman to go across the deep gully and put his rod up just behind a white cow lying near the big gulch some distance below. As it would take some minutes for the rodman to negotiate the gully and reach the cow, the surveyor lay down on the grass in the warm sunshine and unintentionally dozed off.

“He was awakened by hearing shouts and looking down the hill he saw that the cow he had indicated as a marker had gotten up and was ambling up the hill. Keeping right on the cow’s trail was the faithful rodman, who kept looking back frantically at the surveyor and yelling, ‘Mahea? Mahea? (Where? Where?)’

“The surveyor signaled for the rod to be planted right where the rodman was, and took his sight on it there. And that is why the boundary has that funny bulge in it.” 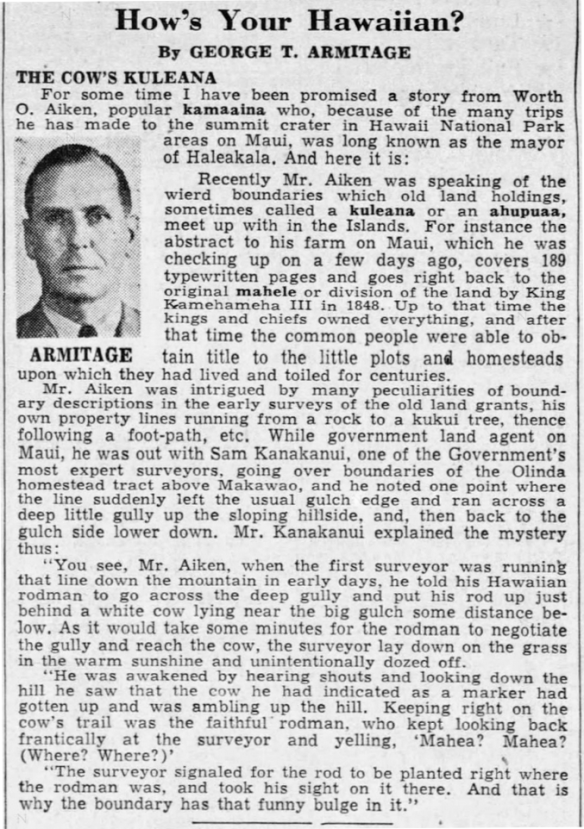