The death of Kapena A. Adamu.—On this past Friday, Oct. 27, here in the town of Honolulu, Captain Alexander Adams [Alekanadero Adamu] died at 91 years and 10 month of age on this earth. He was born in Scotland in 1780, and he died on the sands of Kakuhihewa [Oahu]. He first came to Hawaii nei in the year 1810. Not long after, he was soon under the employment of Kamehameha the great. He was the Captain who sailed the double-masted ship Kamehameha to China with a cargo of sandalwood [iliahi], and that wood from Hawaii was heavily taxed. That was the first haole and pilot who entered the port of Kou [Honolulu]. He lived in Hawaii for 61 years becoming a local. 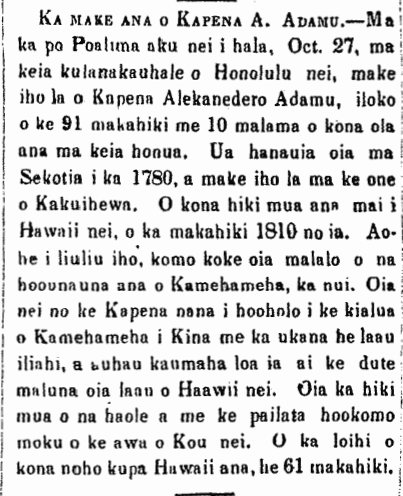