CANOE RELIC—Yosihiko Sinoto is shown digging a trench to look for the end of a plank believed to be part of an ancient double-hulled canoe.—Bishop Museum Photo.

Continued from Page One

…canoe plank, because of the L-shape, so what is it? That was the big question.

“SURPRISINGLY, we found a second piece about one foot below. The two pieces are the same size and the same shape.”

He said the logs that they found were round and well-worked and one was a boom to lash a canoe hull and an outrigger. “The form was very close to the Tahitian sailing canoe,” he noted.

After he returned to the museum, he began searching material on canoes in Oceania and studying canoe models to try and identify the large planks.

He found a Tuamotu canoe model with L-shaped planks tied to the platform and he thinks the two planks on Huahine were similar end boards of a platform for a double canoe.

He said the holes were for lashing. One showed the impression of sennit.

He said if the planks were put together, they would be too large for the 60-foot Hokule’s, Hawaii’s replica of an ancient Polynesian voyaging craft. The end planks on the Hokule’a are about 16 feet.

He said the volume of canoe items at the Huahine site “means the early people in this are were making big double canoes, capable of ocean voyage. It’s just speculation, but maybe one of them landed in Hawaii.”

He said he found another wooden deposit in the pool under the planks but he had no time to bail the water and investigate it.

“I realized the significance and importance of the site and there was no way I could lift the planks to preserve them,” he said. “I had no time or funds.”

However, Gaston Flosse, a member of the Territorial Assembly, was in the hotel and Sinoto told him the government should protect the site and provide funds to continue the survey “because these things would be a national treasure. No museum in the world has such a treasure.”

AS A RESULT of his appeal, he said the high commissioner and other government officials visited the site and said they were willing to take responsibility for it and seek funds from the assembly for further investigations.

Sinoto said he was asked to prepare a work proposal and budget and he recommended a three-year program, with field work three months of each year. He also suggested that Tahiti build a conservation facility for the objects and that French conservationist specialists collaborate with archaeologists to continue the work.

He said he had hoped to start the project this summer but hasn’t heard yet whether his proposal has been accepted.

Meanwhile, he said he reburied most of the objects in the pond to preserve them becuse he had no means to dry them out. “We must keep them in water until they are put in conservation treatment.”

He said another exciting discovery was two completed adz handles. One is a handle for the earliest type of Polynesian implements. This is the first time such a handle has been found in East Polynesia, he said, and it is similar to early Polynesian adz handles found in Samoa and Tonga.

HE ALSO FOUND two pieces of paddles, one nearly complete, which he thinks may be dancing paddles because they’re too small for canoes.

Sinoto said sites previously explored on Huahine have been dated to 850 A.D. to 1100 A.D. However, he believes the date could be ushed back to about 650 A.D. because of the similarity of the early cultural material to items of that period found in the Marquesan Islands.

He said his excavations on Huahine, and recent work of French archaeologists on Raiatea, support the theory that early Polynesian voyagers started from the Marquesas rather than the Society Islands.

HE SAID FISHHOOKS found on Raiatea are similar to those identified with the late part of the early period on the Marquesas, and are close to those found on Huahine.

He said there is a blank period in the history of Tahiti, from about 1200 to 1500 A.D. But he said tourists on Huahine found a Tahitian food pounder on the beach, indicating later complexes may be found to fill in the historical gap if investigations are expanded to the beach areas.

Sinoto said he can tell quite a bit about the life of the early Polynesians on Huahine from his excavations so far, and further work will enlarge the picture.

For example, he said they were well organized with a division of labor and separate areas for fishhook manufacture, canoe building and probably tapa-making. “And they were drinking kava already,” he observed. 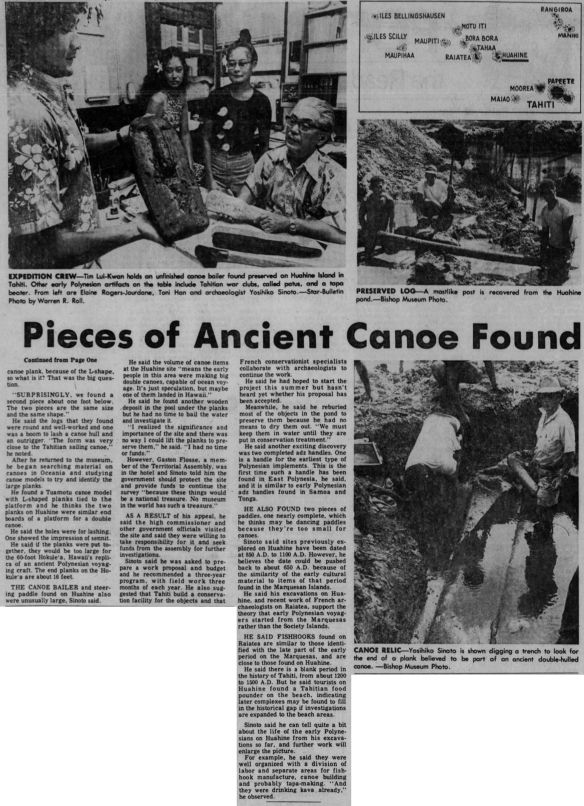 2 thoughts on “Dr. Yosihiko Sinoto and the great canoe, conclusion, 1978.”