Yesterday, the 28th of November, was a national holiday of Hawaii nei, and it was the Thirty-Sixth year as a nation because of the agreement of the great nations of Great Britain and France. It is a day that is cherished by every Hawaiian heart. These are the celebrations that passed before our eyes. There were speeches done in the church of Peleula, by some members of the Stevedores [Ahahui Poola]; that Association paraded from there until the Hawaiian Hotel [Hotele Hawaii], where they prepared a celebratory feast for the day. There was a drill done by the Voluntary Company “Prince’s Own” at Kulaokahua, and there was horse racing entertainment at the race tracks of Ewa. 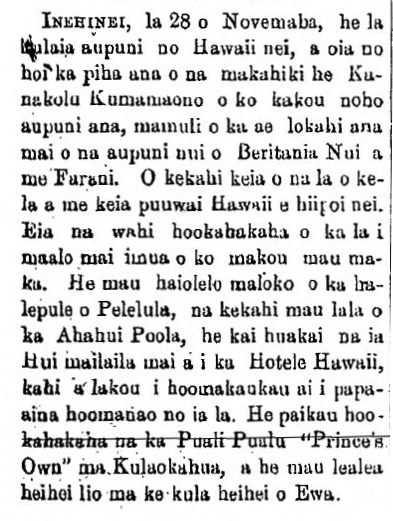