Ka La Kuokoa, Nov. 28.—The day of our Independence came once again this past Monday, but the day was not greatly celebrated, because we are in Mourning for our beloved King who has passed on, END_OF_DOCUMENT_TOKEN_TO_BE_REPLACED

Yesterday, the 28th of November, was a national holiday of Hawaii nei, and it was the Thirty-Sixth year as a nation because of the agreement of the great nations of Great Britain and France. It is a day that is cherished by every Hawaiian heart. END_OF_DOCUMENT_TOKEN_TO_BE_REPLACED

Tomorrow, November 28, is the Independence Day of Hawaii nei, and it will be the fiftieth year of our living as an Independent Nation, and being recognized by the enlightened nations of the world. This is the jubilee year; however, the plunderers believe that they hold the steering paddle and that we will not have a joyful jubilee on that day. What of that; let us be patient, for there will come a day that the lahui will be joyful and be pleased to no end. Hold your breaths! It will come! 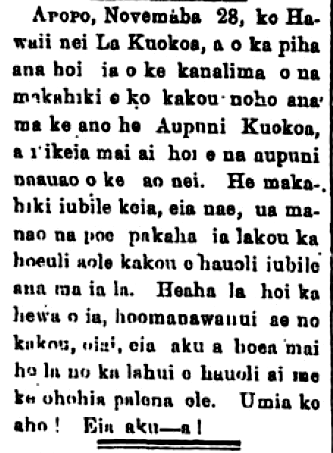 To all citizens who have aloha for their Alii and patriots of Queen Liliuokalani, in the district of Honolulu;

Aloha to you all: Those whose names appear below are members of the Committee to invite all citizens for the YMCA [Ahahui Opiopio Imipono Karistiano] of Kawaiahao and Kaumakapili. END_OF_DOCUMENT_TOKEN_TO_BE_REPLACED

This coming Monday, the 28th of November, is the Independence Day of Hawaii nei, and on that day in the year 1844, recognition was received from the powers of England and France, and this is the 43rd year of our living with independence amongst the great powers of the entire world. END_OF_DOCUMENT_TOKEN_TO_BE_REPLACED

This is the name of a store that opened on this Independence Day [La Kuokoa] by some Hawaiian women in an office of Charles Aki’s [Kale Aki] large new rental space just built at Leleo near Koiuiu. There is sold Hawaiian goods fashioned with skill by the hands of women like ie hats, fans, blankets, purses, lace, and many other things, and also they do tailoring. This shop is under the equal management of Mrs. Aana Kekoa and her sister L. Aoe Like and Meleana Li. We doubt it, but it is said that they did sacrifices with the snout of a pig, and they feasted with those that labored with them until satiated. Our prayer for them is that they meet with good fortune and progress.

Independence Day of Hawaii nei.—This past Wednesday, the 28th of November, was the day that the Nation of Hawaii gained its independence from the other power of the nations of Britain and France. On that day in the year 1843, the great powers of Britain and France joined together to discuss the bestowing of independence on this Nation, and the two of them agreed to this and we gained this independence. The great island of Australia under the power of Great Britain, but as for us, we are overjoyed, and can boast that we are amongst the few Independent Nations under the sun. There are many islands like us, who live peacefully under the powers over them, but Hawaii lives clearly without any power placed above its head. Therefore the commemoration by the Hawaiian hearts from the East to the West of these islands on this day, is not a small thing, but it is important, and we know by heart the foundational words of our Nation. “E mau ke ea o ka aina i ka pono.” The gaining of this Independence, was not by the point of a sword or the mouth of a gun, but was gotten peacefully, and upon He who sits on the great Throne is our efforts and great trust, and so let us not be mistaken that the drinking of intoxicating drinks is what preserves our Independence, that is not the case. The past Wednesday was the 23rd year of our commemoration. 21 shots were fired from the hill of Puowina [aka Puowaina], and the day went on peacefully from morning until night.