PRANKSTERS DO MISCHIEF UPON THE SHADE TREES

Once again the beautification of Honolulu was marred according to what was made known in the morning of this past Wednesday by Mrs. Charles Wilder, the commissioner of shade trees.

The members of the commission found seven fine trees planted on Dillingham Boulevard [Alanui Kilinihama] all cut down. These trees were about ten feet tall, and they were destroyed on this past Hallowe’en night.

This sort of mischief done all over this town was made known to the commission in the past; however, this recent wicked deed was by far the worst. 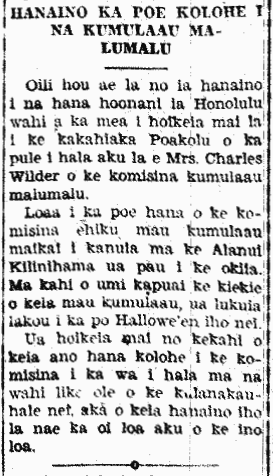 We, the managers of the newspaper Hoku o Hawaii, are blessed through receiving some news items from the Homestead lands of Molokai, the land which the Alii Kuhio put much effort into for the Hawaiians. This is received through the correspondence of the mother, Mrs. Ruby Apiki Bright.

To my dear patient Hoku:

Here is some baggage for the deck of our pride, should it be kindly allowed some free space. On this past 26th of August, the Catholics of Kaunakakai held a silver jubilee in commemoration of the building of their church, St. Sophia, and there was a fair, and the activities that day went well. They gave the name of that well-to-do mother of the Island of Hina [Molokai] to their church, that being Mrs. Sophie Judd Cooke—the open-hearted mother who spread forth her helping hands for its furnishing and building in the year 1914.

The Calvinists held a Bazaar for their benefit, selling all sorts of things on this past 2nd of this month. Everything was lovely.

[Ruby Apiki Bright started her regular column reporting on news from Molokai on this day, September, 20, 1939, in Hoku o Hawaii. I hope some day soon, these papers will be rescanned again clearly so they are easily read!]

Kuakini was the son of Keeaumoku, the son of Kalanikauleleiaiwi, the sister of Keawe. They are the royal ancestors of Hawaii Island’s high chiefs, Kuakini was befitting the class of high chiefs amongst Hawaii’s alii nui.

Kuakini was the son of Namahana who was born from Kalanikuihonoikamoku, and they are Maui’s royal ancestors, and therefore, Kuakini is amongst Maui’s…

…class of high chiefs; Kuakini was born as an alii.

His caretaker [kahu hanai] was Kameheaiku, and Kuakini grew up at Keauhou, and he was made by his father, Keeaumoku, to pray to the wooden gods; this was Kuakini’s duties in his youth, the worship of the wooden gods.

He was the one who cared for all the temples in Kona, along with the Loulu temples, and in regard to his worshiping, one of the names Kuakini was called was Kiipalaoku, for Ku was the god for whom he would fetch pala fern.

Kuakini was a thinker from when he was small; he was meticulous; he often would sail boats with the other children in his youth, and when he grew up, he went with his parents to Maui, and thereafter he lived with Kamehameha I.

He became an aikane of Kamehameha I, because Kuakini possessed a fine body, he was skilled in English, he thought much about the way a body functions, he was sullen, and was a man of few words.

When Kamehameha I died, Liholiho them went to Oahu, and Kuakini was appointed Governor of Hawaii, and it was he that was to care for Hawaii until his recent death.

When Kuakini was assisting intently with the kingdom of God, it was he who built the great churches here on Hawaii Island.

O Armstrong [Limaikaika], please ask of Thurston [Tatina] or Bishop [Bihopa], for they know what he was like for both of them lived with him.

O Father Armstrong, I am living here on Hawaii these months, and will then return to Maui, or perhaps not. D. MALO. 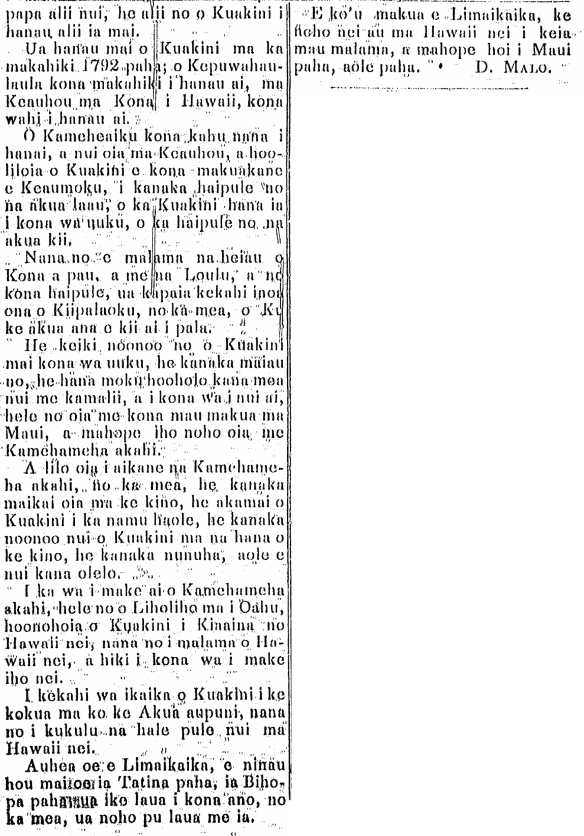 The Christmas celebration on Maui last year was very nice, even if the rain was falling.

Every household took steps [to celebrate] by decorating the tree in their front yard as a Christmas tree, being that a majority of the christmas trees from America were dried up; but this did not hold up their festivities.

Last week there were a huge number of passengers carried here to Maui by the steamer Hualalani, and there were teachers and students who returned to spend their vacation at home with their families.

Francis McMillen of Wahiawa, a student of the Kamehameha School for Boys, is spending his grandmother, Mrs. C. K. Kunane of Lahaina.

It is sad to hear of the passing from this world of Mr. Kulhman, the first Cane Burner [Puhiko] of the Pioneer Mill Company [Hui Mahiko Paionia]. He became important amongst the kamaaina, and he was one of the most skilled at Burning Cane.

The locals of Lahaina are saddened at his passing, and he has left a hole that cannot be soon filled.

[Lahainaluna School dorm matron Alice Kanoekaapunionalani Kunane Banham had a regular column in the Hilo newspaper, Hoku o Hawaii, where she reported all sorts of Maui news of the day.]

[Found under: “Bits of News from Kauai”]

Those lei blossoms, the momi of Niihau of Kahelelani, Mr. and Mrs. Niau, and their daughter Mrs. Miriam Hanaike and her daughters, have arrived, and they are spending their days gazing at the beauty of Manookalani [Kauai], the flower garden famous for the fragrance of Mokihana. They will return to the land famous for the Shell Lei [Lei Pupu].

(Your writer has composed these lines of poetry.)

[Abbie P. Palea had a regular column in Hoku o Hawaii, writing about various happenings on Kauai. She often wrote in with poetic compositions by her own hand. Here is just one of them. Although you will find credit given to Joseph Kelly (Keʻale), at the Bishop Museum’s Niihau Shell Lei Exhibit going on now (see it while you can!), i would suggest that because there seems to be no counter claims in later newspapers to Palea’s statement, that “Niihau o Kahelelani Hula” was indeed written by her.

There is so much to be learned from the old Hawaiian-Language Newspapers!] 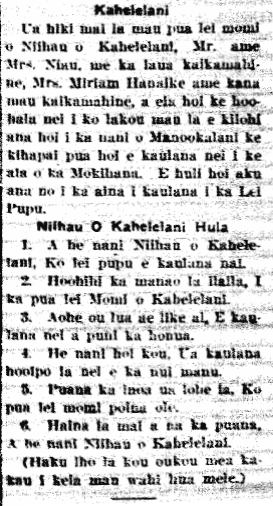 A private collection of over 60 stunning and pristine lei will be featured in “Ni‘ihau Shell Lei: Ocean Origins, Living Traditions” examines the science behind Ni‘ihau shells, as well as its manufacturing history and the master craftsman who make them.

This exhibit will be showcased in the Bishop Museum’s Long Gallery.

Mahalo to our sponsors:

[This is an image done of the Bank of Bishop and Company, which that year was celebrating its forty-first anniversary. It was at this time located at the corner of Merchant and Kaahumanu Streets.] 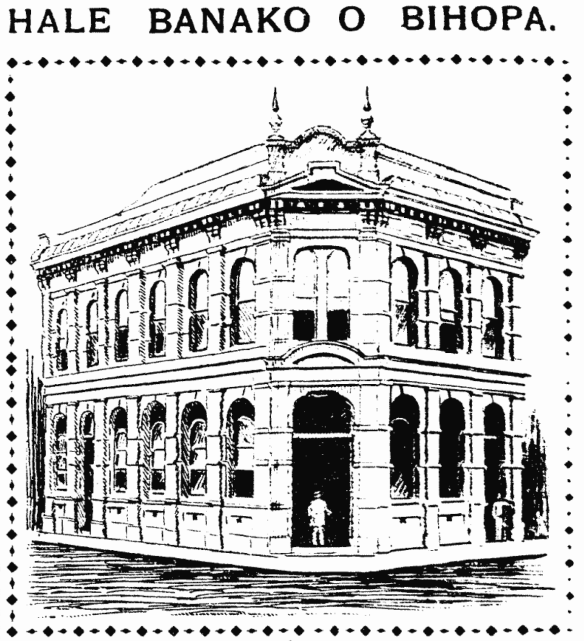 [Here is another interesting mele found in a nice description of an excursion aboard the train Kaala to the newly-opened Haleiwa Hotel. It is added into the narrative by the writer as he describes passing by Puuohulu. This inserting of mele into prose is something found often in Hawaiian writing. This composition seems very reminiscent of another perhaps more famous mele still sung today.] 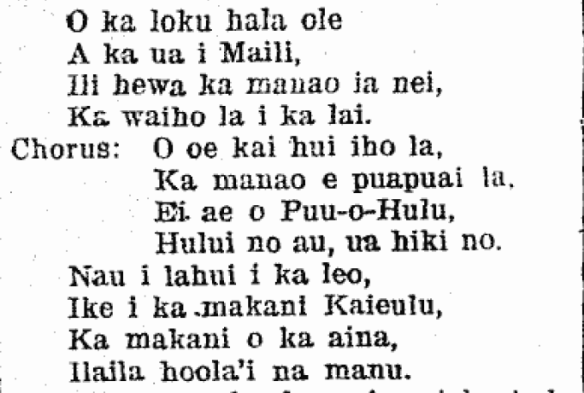