Honolulu, Hawaiʻi—An ʻahu ʻula (feather cloak) and mahiole (feather helmet) gifted to Captain Cook in 1779 are being permanently returned to Hawaiʻi by the Museum of New Zealand Te Papa Tongarewa.

These cherished items were gifts from Hawaiian Chief Kalaniʻōpuʻu to Captain James Cook and have been in Te Papa’s collection since being gifted to the museum in 1912. 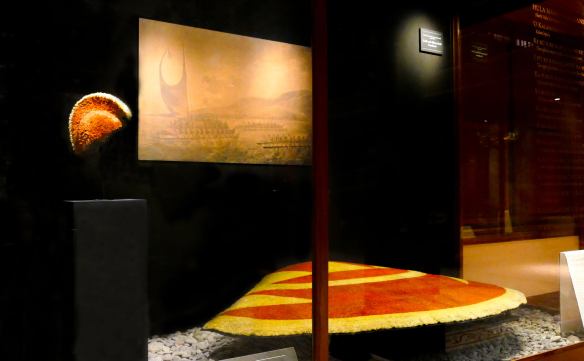 The Era of Kalaniopuu, 1779. Pertaining to the Death of Captain Cook, that is Lono.

On the 24th of January, Kalaniopuu and his warriors returned from Maui and landed at Awili in Kaawaloa, and stayed at Hanamua at Keaweaheulu’s place, but they were also on Maui at war with Kahekili.

Kalaniopuu saw the many women were at the ocean on the ship to prostitute themselves [hookamakama], so Kalaniopuu forbade women from going down to the ship. And the haole saw that the women were not coming to the ship, so the haole went into the uplands of Napoopoo and at Kahauloa, and on this side of Kaawaloa to solicit prostitution, and the women received a great amount of foreign rubbish [opala]. END_OF_DOCUMENT_TOKEN_TO_BE_REPLACED

Speaking of the Captain Cook relics which have been secured for the New South Wales Government, our London correspondent says, writing on September 9:—”Sir Saul Samuel has secured for the New South Wales Government the whole of the interesting collection of Captain Cook’s relics which were on view at the late Colonial and Indian Exhibition. Some of them he has had to purchase, others have been presented as gift. Your…

END_OF_DOCUMENT_TOKEN_TO_BE_REPLACED

THE PRESENTATION AT KAPIOLANI PARK ABOUT LONOIKAMAKAHIKI AND KAIKILANI WAS BEAUTIFUL

SOME SCENES THAT WERE SHOWN—(1) Kakuhihewa, King of Oahu. (2) The Alii and Kaukau Alii of King Lonoikamakahiki of Hawaii leaving the throne. (3) King Lonoikamakahiki. (4) The Chiefs and Attendants in the Procession. (5) Queen Liliuokalani, and Her Companions watching the Performance. (6) The Attendants of Queen Kaikilani. (7) The Retainers of Queen Kaikilani. END_OF_DOCUMENT_TOKEN_TO_BE_REPLACED

I just put up the short excerpt the other day describing Kalaniopuu giving James Cook his ahuula and kahili. And now there is this exciting announcement from the Bernice Pauahi Bishop Museum!

[It should be perhaps made clear however that the ahuula at least has made its way back to Hawaii nei two times since 1779, courtesy of the Dominion Museum, the predecessor of Te Papa Tongarewa]. The first time was in 1960:

Each year the Museum attempts to bring back for the Aloha Week exhibit a fine example of Hawaiian featherwork from abroad. This year the Dominion Museum of Wellington, New Zealand, has generously loaned a large Hawaiian feather cloak, which to the best of our knowledge, was presented to Captain Cook’s expedition in 1779. Aloha Week marks the first return of this cloak to Hawaii.

The second time was for the “Artificial Curiosities” exhibit at the Bishop Museum which ran from January 18 to August 31, 1978.

Also, check out this previous post on an amazing story about other featherwork given to Cook by Kalaniopuu!

[Found under: “He Moolelo Hawaii”]

In the month of February, the 14 day, 1793, Vancouver [Vanekouwa] returned to Hawaii nei, from the northwest of America, and landed at Kawaihae.

The men pleaded for guns and powder from him. Vancouver refused and would not sell those sort things to them. There was great desire of Hawaiians for those things during those days, because it was a time of war, and Kamehameha was conquering the nation then; Oahu and Kauai remained.

And from there, Vancouver landed at Kealakekua, on the 22nd of that month and met with Kamehameha.

At that time, he gifted Kamehameha with two cattle, a bull and a cow. The cattle that Vancouver brought were from Monterey, a land in America.

These animals were greatly appreciated by Hawaiians because they were unusual, and they were called puaa pipi. It is from those pipi that the cattle which roam these days at Waimea and Maunakea and the other forests of Hawaii proliferated.

Kamehameha treated Vancouver kindly; Vancouver was facing hardship without water and took his water barrels into the uplands, and Kamehameha commanded his men to carry the barrels and to fill them with water. END_OF_DOCUMENT_TOKEN_TO_BE_REPLACED

[Found under: “He Moolelo no ka HOOKUMUIA ANA O HAWAII”]

PERTAINING TO THE DEATH OF LONO.

And on the 4th of February 1779, Lono leaves Kealakekua and his ship sails directly outside of Kawaihae and Kohala; it is noticed that one of the masts of his ship is rotten, so he returns to Kealakekua to build a new mast for his ship. END_OF_DOCUMENT_TOKEN_TO_BE_REPLACED

At the sale of the effects of some of the late Charles Kanaina, the feather cloak was purchased by the Government for $1,200. Her Majesty Queen Dowager Emma was a competitor for this cloak, the actual money value of which, if calculated on the basis of cost, it would be difficult to estimate. This cloak belonged to Kalaimamahu, the father of Kekauluohi, who was the wife of Kanaina and mother of the late King Lunalilo. Two portraits, one of Lunalilo and the other of Kekauluohi, were also bought by the Government for $100 each. That of Lunalilo was painted by Norwegian artist, named Jurgensen. The painter of the toher is not known. 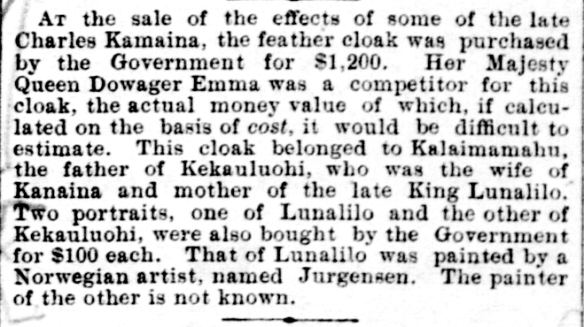 106. A cloak said to have been destroyed in the conflagration caused accidentally in the attempt of the Board of Health to stamp out the bubonic plague in the Chinese quarter of Honolulu. At the time when the claims for losses caused by this great fire were presented to the Commission appointed for the purpose, my assistant, Mr. Allen M. Walcott, obtained from the claimant, Peleioholani, a carpenter by trade, the following particulars: The cloak was called “Eheukani” and was made in the time of Keeaumoku (the father of Kaahumanu) and finished shortly before the battle of Mokuohai (July, 1782) between Kamehameha and Kiwalaó. Keeaumoku’s wife gave it to Peleioholani’s grandmother. Principally mamo* feathers with a small crescent of red iiwi in each upper corner; between the shoulders a round spot of black oo feathers, from which a line of red iiwi led down to a trifle below the middle of the cloak. The cords at the neck were of human hair, an unusual thing. It must be remembered that the design (Fig. 16) as well as the following measurements are from the description given to Mr. Walcott by Peleioholani and are of course only approximate. They are worth recording as differing from any robes described. Length, about 4 feet 9 inches; neck measurment about 2 feet; circumference at bottom about 5 feet 8 inches. It is a matter of tradition that 27,000 birds were captured to furnish the feathers for this cloak. In the left side were seven spear holes that were never patched, and about which were blood stains. Keeaumoku was severely wounded in this battle, and it was rather a fancy with the old chiefs to retain the honorable scars in the ahuula, as in the cloak given by Kamehameha to Vancouver to be taken to England for King George.

*Probably oo, for a genuine mamo ahuula was devoid of any adulteration by other colored feathers. It should be stated that Peleioholani’s claim to be the owner of this cloak was disputed and it was said to have been taken from the palace years ago; but from what I have seen of the observation of natives whose duty it was to care for the royal robes, I do not believe one of them could describe the pattern of the cloaks he or she had seen for years.

[And a note on the note by Brigham. I am not sure the oo instead of mamo feathers comment should be considered true when even the great mamo feather ahuula of Kamehameha Paiea has red iiwi feathers within it…]

COMPANION OF A PRINCE

A Hawaiian Chief Who Fought in Africa.

HE TELLS A ROMANTIC TALE

WITHIN THREE months a stalwart Hawaiian will leave Honolulu and journey to London to attend the reunion of the survivors of one of England’s wars of conquest fought more than thirty years ago. Upon the Hawaiian’s body are the scars inflicted by sword, spear and bullets, received while he was fighting under the flag of St. George in the service of Queen Victoria upon the battlefields of Southern Africa. According to a romantic story which the Hawaiian tells, few amongst the veterans who will gather in the capital of the British nation will have more honorable records for bravery and conspicuous gallantry in the face of a dark-skinned enemy than he, and few will there be whose entire lives are so wrapped in a halo of romance. Linked with this Hawaiian’s life are those of Kings and Queens, Dukes and Admirals, Generals and Captains, and yet today he is an humble resident of the Hawaiian Islands. END_OF_DOCUMENT_TOKEN_TO_BE_REPLACED