This past Monday Charles R. Bishop became eighty-seven years old, one of the old haole of Hawaii nei who Hawaii greatly is in debt to for his efforts to search for and to work for the welfare and the progress of Hawaii nei. END_OF_DOCUMENT_TOKEN_TO_BE_REPLACED

Charles Reed Bishop, a builder of Hawaii in the field of education as well as business during the 19th century, and who arrived in the Hawaiian Islands 100 years ago this week, on October 12, 1846, will be remembered at centennial services at the Kamehameha Schools Friday and Saturday. END_OF_DOCUMENT_TOKEN_TO_BE_REPLACED

IT IS FOUNDER’S DAY.

FORMAL OPENING OF GIRLS’ SCHOOL AND THE MUSEUM ANNEX.

This is Kamehameha School Founder’s Day. It is the anniversary of the birth of that noble woman, Bernice Pauahi Bishop. This Hawaiian calendar feature was marked by the formal opening of the Kamehameha School for Girls and the Chas. R. Bishop Museum Annex.

The exercises began at 2 o’clock this afternoon. With the literary program, the sports and viewing the new school and the Annex, to say nothing of the manual training department, there were visitors on the grounds till after 3 o’clock. END_OF_DOCUMENT_TOKEN_TO_BE_REPLACED

[Found under: “LOCAL AND GENERAL NEWS.”]

Mr. C. R. Bishop has made a gift of his whole Molokai property to the Kamehameha Schools, founded by the will of his lamented wife, Princess Bernice Pauahi Bishop. END_OF_DOCUMENT_TOKEN_TO_BE_REPLACED

These young Deer will be sent all the way to California, for a Zoo in that state of the United States. The fawn are spotted white and red.

According to the Captain of the steamship Mokolii, about these young Deer, they are a gift of C. R. Bishop to a Park in California, for these Deer are not seen in America; only red deer are seen there, not these type; and therefore they are being taken there. To be proliferated in America. END_OF_DOCUMENT_TOKEN_TO_BE_REPLACED

The Bishop Collection of Curios.

One of the Most Interesting Sights In Honolulu Pleasantly Described.

HONOLULU, Feb. 8.—Above the inner entrance to the Museum of Hawaiian and Polynesian History is a tablet of polished mottled stone, in which is engraved in letters of gold the following inscription:

To the Memory of
BERNICE PAUAHI BISHOP,
FOUNDER OF THE KAMEHA-
MEHA SCHOOLS OF HO-
NOLULU.
A Bright Light Among Her Peo-
ple; Her Usefulness Survives
Her Earthly Life.

A Bernice Pauahi, she was related to the royal family of the Kamehameha dynasty, and the cousin of Queen Emma, two women who have indelibly inscribed their names upon the hearts of…

…all Hawaiians, whether by birth of association. She married the Hon. C. R. Bishop, and with her immense wealth and her kindly deeds through life, created a new life among the Hawaiians. Upon her death she left most of her wealth to endow the Kamehameha Schools, a separate school for boys and a separate one for girls. These schools are kept up entirely from the income of her estates, which have become so vast as to render it necessary to erect other buildings throughout the Islands in order to expend the revenue. In memory of his wife, the Hon. C. R. Bishop dedicated the museum in her name, laying aside a princely endowment. Collectors have scoured the Hawaiian Islands for curios of historical and intrinsic value and have succeeded by the most diligent effort and at great expense, in depositing in the museum an invaluable collection of ancient materials which would warm the cockles of the antiquarian’s heart beyond measure. Calabashes, large and small, ancient and modern, have come into the museum; some were in the possession of families, relics passed from one generation to another; others were found in the caves where in ancient times were buried kings and chiefs. Idols of grotesque shapes, dedicated to all the elements of nature, good and evil; some dedicated to Pele, the Goddess of Volcanoes; others to the poison god and to the fish god; some made of stone, others of the valuable koa and kou woods; one made of the trunk of the poison tree, its wood, upon being steeped in water, being a most powerful, yet undetectable poison which acts upon the heart, and which was used by the kahunas and chiefs. Beautiful feather cloaks of wonderful sheen and delicate texture, worn by Kamehameha the Great during his tour of conquest a century ago. END_OF_DOCUMENT_TOKEN_TO_BE_REPLACED

CHARLES R. BISHOP THANKS THE CHAMBER

Charles R. Bishop, the founder and first president of the Honolulu Chamber of Commerce, to whom a congratulatory cablegram was sent on January 26, last, writes to the Chamber as follows:

“Many thanks to the Honolulu Chamber of Commerce for congratulations and best wishes on this the eighty-seventh anniversary of my birth. Wishing the Chamber continued efficiency and prosperity, I remain, yours very truly,  CHARLES R. BISHOP.

[C. R. Bishop is widely known for his involvement in many great endeavors, but he might not be so well know for his founding of the Chamber of Commerce which is still active today.]

Crypt of Lunalilo.—Because of the request by the Executor of the Will of the Deceased dearly beloved King Lunalilo to Kawaiahao Church, for a place to build his crypt, as per his will, therefore, an open space in front of the church was given, makai of the circular yard right in front of the entrance to the church. There will be built his crypt and he will sleep there with his people in the same cemetery. How sad this is! 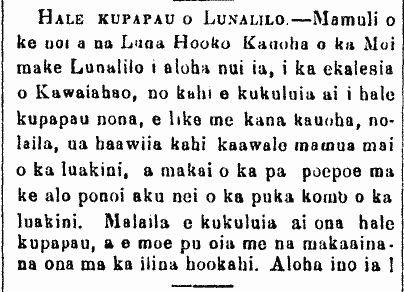 Last Hours of the Hawaiian Monarch.

Solemn Scenes at the Royal Bedside.

The Succession and the Political Situation.

Sketches of the Dead Sovereign and of the Heirs to the Throne.

Kalakaua I., King of the Hawaiian Islands, is dead. He expired at 2:33 o’clock yesterday afternoon in his room at the Palace Hotel, where for three days he had lain unconscious on his bed. Surrounding him at the moment of his death were Col. Macfarlane, the King’s Chamberlain; Col. Hoapili Baker, His Majesty’s Equerry-in-waiting; Hawaiian Consul McKinley, Admiral Brown, U. S. N. Rev. J. Sanders Reed, Rev. F. H. Church and a number of personal friends of the King. Immediately after the death, Admiral Brown notified the Secretary of the Navy of that fact, Mayor Sanderson was also notified, and he called a meeting of the Supervisors for 9 o’clock this morning to consider proper action in the matter. The remains were embalmed and this afternoon they will be removed to the mortuary chapel of Trinity Church, where they will be guarded by a detail of United States soldiers.

The Scenes in the Chamber of the Dying Monarch.

It was a pitiful and most impressive scene. The dying monarch lay gasping upon his bed, his emaciated body heaving convulsively with each of his labored respirations. At the bedside stood two ministers of the Gospel, physicians of the body had given way when they had come to the sad conclusion that Kalakaua was beyond mortal aid. Seated at the head of the bed, clasping the left hand of his King was Col. Baker, Kalakaua’s Aid-de-camp, whose strong frame was bent with sorrow, and who with great difficulty kept back the flood of tears which trembled in his eyes. Bending over from the right side was Col. Macfarlane, Chamberlain of the King. The suspense of the last few days had almost prostrated him, and his face bore traces of weeping. Crouched upon the floor against the wall near the bedside were the King’s valet Kahikina, an Hawaiian youth, and Kalua, a young girl from the Gilbert islands, who had been a most devoted servant to Kalakaua. They formed part of his suite on his arrival here.

Only a light coverlet of rich brown design covered the body of the King. In his struggles to throw off the firm reaper who was gradually pressing more heavily upon him, Kalakaua had thrust his arms out upon the bed. During the forenoon his faithful servant Kalua, in an endeavor to make the King as comfortable as possible, had placed beneath his chin a wide soft scarf of blue silk. There it remained until the death, seeming as it rose and fell upon the bright red undershirt to be symbolical of the wavering between this and the great beyond of the spirit of the stricken King.

Kalakaua was possessed of great vitality, and to the last he resisted the destroyer with a persistence which excited the wonder of the medical men, who knew that the King’s time had come. Though for three days past he had been unconscious and life had apparently been kept in him merely by the stimulants applied internally through natural channels or hypodermically, his constitution seemed determined to keep the spirit with the trembling body. Even after the physicians had relinquished all hope and, knowing that he must die, had ceased to apply stimulants, he continued to struggle on.

During the morning Drs. Woods, Watts, Sanger and Taylor were in attendance.

They consulted and announced that in their opinion the King would not live more than a few hours. He had then been unconscious for nearly forty hours, with the exception of one brief moment in the early morning, when he recognized Admiral Brown and spoke to Colonel Baker saying:

“Well, I am a very sick man.” END_OF_DOCUMENT_TOKEN_TO_BE_REPLACED

On the evening of Dec. 28th, a few of our citizens met and engaged in an informal interchange of ideas in regard to the importance of forming an Historical Society. Prof. Alexander was chosen temporary chairman, and the Rev. Dr. Hyde secretary. It was then decided that the proper time had come for the organization of such a society, and a committee composed of Prof. Alexander, Rev. Dr. Hyde and Mr. J. S. Emerson was chosen to draft a constitution. An adjourned meeting was held last Monday evening at the Honolulu Library, at which this committee made its report. A large number of our most prominent citizens attended, and much interest was shown in the formal organization of the new society. After the adoption of the constitution the following officers were unanimously elected: President, Hon. C. R. Bishop; Vice-President, Mr. J. S. Emerson; Corresponding Secretary, Hon. W. D. Alexander; Recording Secretary, Rev. Dr. C. M. Hyde: Treasurer, Mr. T. G. Thrum. The constitution states that the object of the society is “the collection, study, and utilization of all materials illustrating the Ethnology, Achæology and History of the Hawaiian Islands.” Active members are to pay an initiation fee of five dollars and an annual fee of one dollar. It is hoped that arrangements will be made by which the society will secure as its permanent quarters, for the accommodation of its prospective library and a place of meeting, the large front room of the Honolulu Library. Immediate efforts are to be made for the formation of a library which shall include all books relating in any way to this Kingdom, and all books, pamphlets and newspapers ever printed on the Hawaiian Islands. END_OF_DOCUMENT_TOKEN_TO_BE_REPLACED