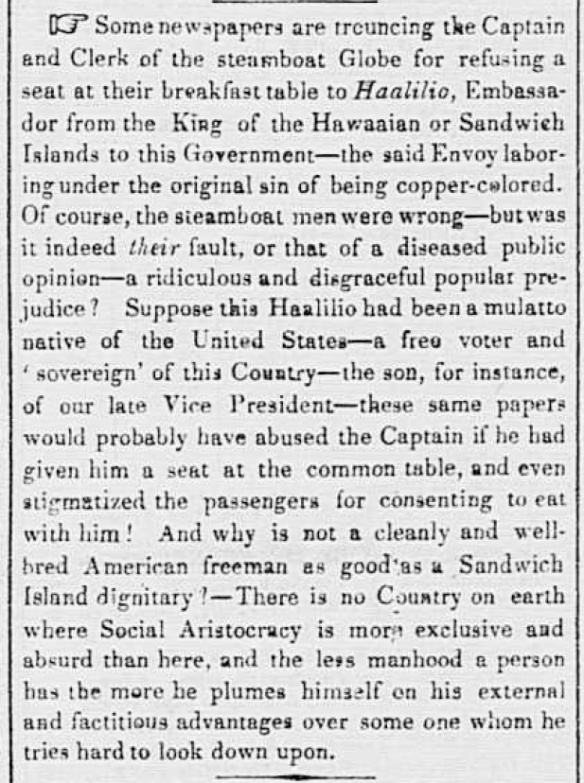 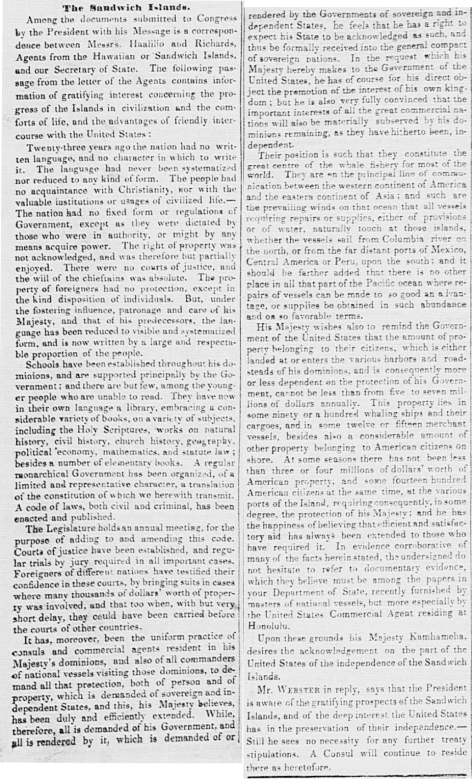 [An article found on Chronicling America]

So too was this past holiday, the 28th of Nov.; there was no work done on Oahu, as it was a day of rejoicing for the independence of this Kingdom.

At 12 noon, the cannons rang out, the naturalized haole held a party at [Mau…lika?] and the King held a banquet at his [?] with his alii and the young alii. The doors of the palace of the King were opened, and crowds of haole and [?] came to see him. Present was the American Consul in his beautiful attire as well as the Consul of Denmark.

Early in the morning of that glorious day, the King and some alii entered the hous of Jehovah as well as many of the public, to give thanks to the one to whom the nation belongs. This was as it should be, for Jehovah is the Head of Monarchs of all kingdoms, who cares for and who overthrows, from who comes protection and independence of a nation, [?] and the people rejoice in him. Should this nation, Hawaii, be blessed, the glory goes to God, and not upon the alii and man.

At our assembly in the house of God on that happy day, the Pastor spoke on this topic.

“For Israel hath not been forsaken,
“Nor Judah of his God, of Jehovah of hosts,
“Though their land was filled with sin against the Holy One of Israel.”

The lesson of this passage was, ‘There are many sins committed by the people and alii of Hawaii, and yet God has not forsaken them.

God sees the drinking of alcohol, the fornication, evil deeds on his sacred day, the worshiping of idols, the fighting, the the overburdening, the snatching, the stealing, the lying, the indolence—and yet God has not forsaken you; he is patient and gives blessings. This nation was near lost, but was held fast by God who returned the rule of the land, and his nation is expanding, along with his righteousness and grace, from one corner of the land to the other.

Therefore we must acknowledge Jehovah, and always give him praise, and listen to his voice. Don’t just boast of the independence of the nation, but act intelligently and righteously. Leave laziness behind and work, and ward off all evil things and hold fast to the things which will elevate this independent nation. And then God’s blessings and patience will be worthwhile. 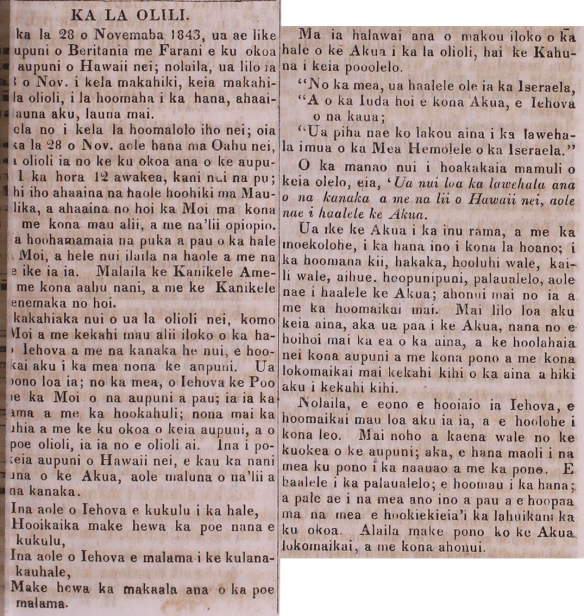 The 28th of November.

On that day, the soldiers of Honolulu drilled about Kulaokahua, both Hawaiian and haole soliders, hundreds of them. The King and Queen went and inspected the troops; many of the officers from the British, American, and French warships came. They admired the drilling.

On the night, the Hawaiian alii and the haole ones, as well as all of the prestigious people came to the Palace to see the King and the alii.

On the 28th of Nov., the nations of Britain and France acknowledged the independence of this Hawaiian Nation, and that is the reason for the celebration on this day. 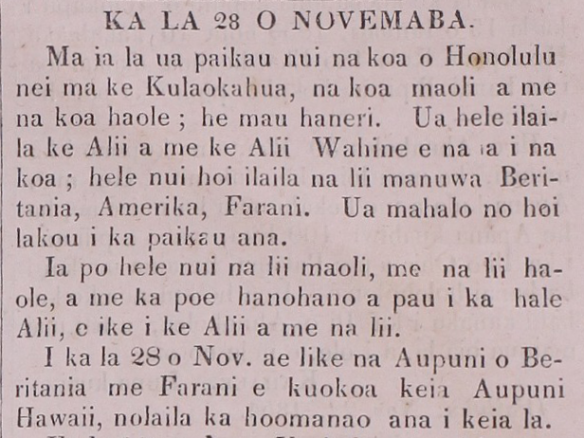 In the month of Mei, 1862, at the Conference of American missionaries here in Honolulu, Rev. L. Smith, and Rev. S. C. Damon were chosen as the Committee to clarify the appropriate day for the churches of Hawaii to give thanks to God for his blessing the people of this Archipelago in this year which is coming to an end.

Therefore, we select the last Thursday of this November, that being the 27th, as the day to give thanks to God. Here are some reasons to encourage the gathering of pastors and church members to celebrate this day.

1. For this Nation’s peace, and lack of war with other Countries.

2. For the availability of food for the people of this Archipelago.

3. For the lack of trouble from pestilence.

4. For the spread of the Bible here in Hawaii; and for the ability of the people to worship the living God as they wish?

5. For the abundance of Schools, and Churches, and teachers to teach the people.

6. For the good health of the King, and the Queen. Yet we remember with aloha, their tragedy, and grief, for the passing of their beloved child, “Ka Haku o Hawaii”.

There are many other things to encourage us to glorify God in the open as one.

Therefore, God’s people should gather at their churches on the specified day, to give their appreciation, exaltation, and songs of praise. 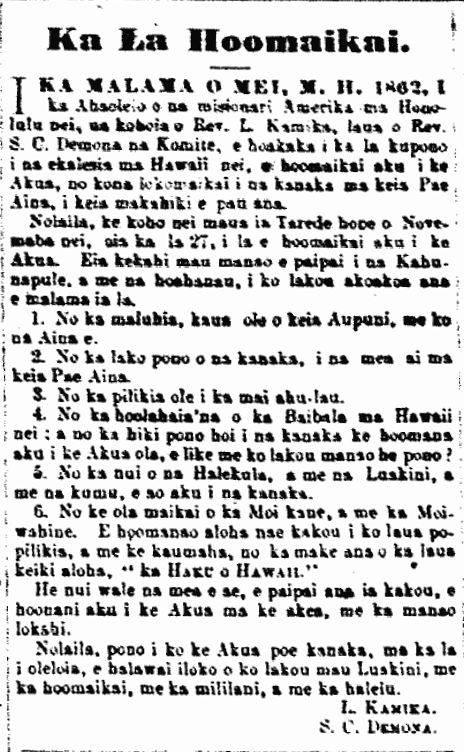 O Hawaiian Nation, the steamship “Meifoo” from China, entered into Honolulu Harbor, and within its passengers, there are six Chinese who are suffering from that frightful annihilating disease of 1853–4, that illness that took ten-thousand of our beloved people. There are two of them with the disease that are very bad, and four will perhaps live.

We understand the the Board of Health has decided to quarantine the sick at the hospital at Kahakaaulana, and for those that are not sick, to quarantine them at Kakaako, while detaining the agents of the ship to pay all expenses should the disease spread here after.

We call out to our beloved nation, let us watch out for ourselves, and let us not associate much with these foreigners, for the time for concern has come upon our nation, because this disease was brought here and it is at our own door. Should we be saved, it is only through the love of the Almighty.

Do recall, O Leaders of our Nation, as well as the members of the Board of Health, that the cabinet of Gerrit P. Judd [Kauka] was ended because of this, and we fear that maybe there will be one that follows the first one in the very near future. Only time will tell.

As we were returning to print the paper for today, it was heard that Smallpox appeared in the body of a haole boy of this town. Here is a query, a question: what of this?

Upon the schooner, “Mana,” there appeared a case of smallpox in the cook, as the ship was sailing for Hawaii. It returned to Honolulu, and all aboard were quarantined, and the sick person was taken to the hospital at Kahakaaulana. When the illness starts appearing, perhaps only one thing can save us, that is by us being vaccinated, when Hanakapahu [another name for smallpox] strikes with his merciless tongue. 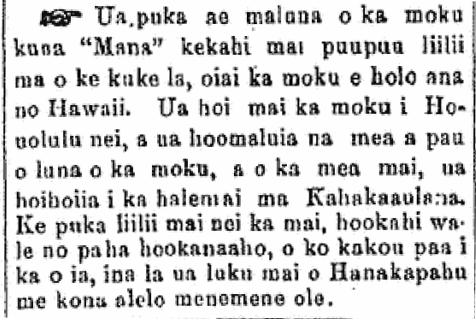 The church pastors did have this picture of the old church which was located on what is now a girl’s school nearby (Ferris). They do not believe that this is the church, because they hear it was built later (but there are no documentation to any of this)… 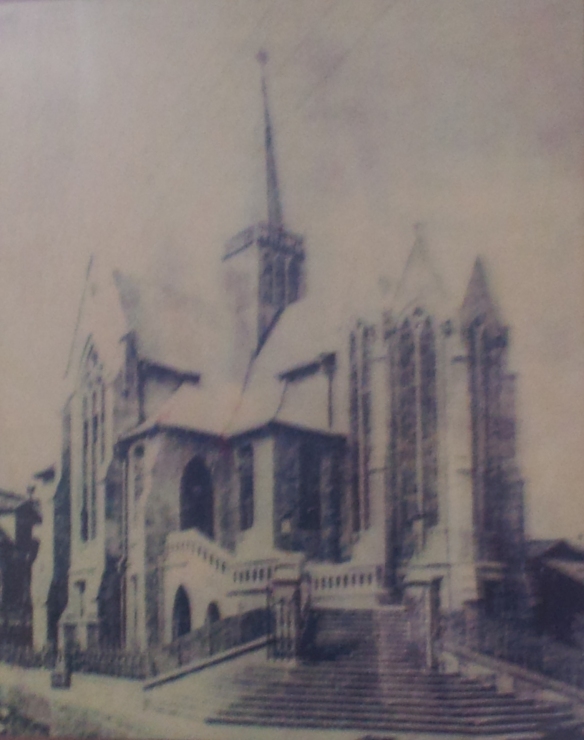 …so I can’t say I stood where Kalakaua stood 130 years ago, but all I can say for sure is that it was close by…