THE INTENTIONS OF THE MAKAAINANA OF NORTH KONA, ISLAND OF HAWAII, FOR THE GOOD OF THE THRONE AND THE WELL-BEING OF THE PEOPLE.

We, the makaainana of the King, living in the district of North Kona, Hawaii island.

Through our Committee, humbly report that under the protection of the Law, for the life of the People and the good of the Throne of Hawaii. END_OF_DOCUMENT_TOKEN_TO_BE_REPLACED

The Census Taker [Luna Helu] has reported of those who died from small pox [mai puupuu liilii] in Ewa, and Waianae; thus. The number of deaths here in  Ewa is 1,214, in Waianae, 170. END_OF_DOCUMENT_TOKEN_TO_BE_REPLACED

ENTIRE FAMILIES ARE DOWN WITH FLU

Influenza cases and deaths reported in Honolulu and Oahu since February 1:

In January there were 69 deaths from influenza on the Island of Oahu.

On the 17th of May that went by, on that day, Umi (f) was born of Kamalii (m) and Wae (f); she was a fine looking girl, but she soon died on the 8th of June; and perhaps I should with this writing explain the very strange way she died, and this is it: END_OF_DOCUMENT_TOKEN_TO_BE_REPLACED

O Hawaii Ponoi Newspaper, aloha kaua. Please permit me to place my light parcel in an open space of your columns so that our friends may see, from the rising of the sun to the setting of the sun. END_OF_DOCUMENT_TOKEN_TO_BE_REPLACED

There have been 26 cases of flu (Spanish) reported to the Board of Health, with one death; 16 were in Honolulu, and 10 at the Mills School in Manoa. 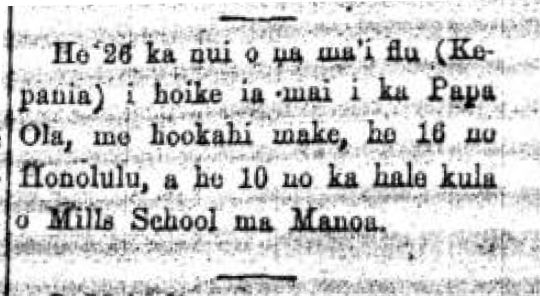 SEES THE LAND OF SUFFERING AS A STRANGER.

On the 12th of this September, in the morning hours, there was crying as people walked outside of the grounds of that hallowed castle, and at 8 o’clock or so was when our belongings were readied. The wailing was heard of women for their husbands, men for their wives, parents for their children, children for their parents, family for family.

And at 11 o’clock, the patients were called to board the car; a veil was spread, and people could no more see us; the cars left the grounds, and great mourning was heard; your writer saw his dear mama and our child for the last time; and the writer heard the calling of my beloved Ape, “O Papa, come back to me.” END_OF_DOCUMENT_TOKEN_TO_BE_REPLACED

Perhaps it is well that I explain in your newspaper a thought responding to W. P. Waha of Honomaele Uka, Hana, Maui.

In the newspaper, Kuokoa, Buke 10, Helu 27, of the 8th of this past July, Waha published an opinion pertaining to the Practice of Hawaiian Medicine. From what I saw searching from beginning to end; this is what I mainly got out of it, that “he is jealous, malicious, and a slanderer, ” and so forth. You just chomp your mouth like a wild shark of the sea saying, “All of the Hawaiians are dying because of whom? Yes! They are dying because of you Heads of the Government!” If that is the intent of the questioner, then I ask of you, “Is that indeed true?” Let us all look at the thoughts of this malicious inciter, being that the Heads of our Nation are not looking to kill off the Hawaiian Lahui, and ways to kill them, but it is you, and it is you yourselves who offer yourselves off to die; and you enjoy grumbling to our Heads of Government. Take a short look at this, you fault finder; During the past session of the Legislature, in the year 1870, $4,000 was put to teach Hawaiian youths Medicine, and in the month of November of last year, the government chose the proper person in which they trust, as a teacher for the school, and it is being taught now. There is no other reason for this action except because of the aloha for you, O Hawaiian people.

Take another look; some Hawaiian medical kahuna are licensed, so that they can practice medicine in the country and areas where there are no doctors. The ignorant and uneducated practitioners are being sued. If you look at these actions by our Government Heads, it appears as if they are concerned that our Lahui will perish. END_OF_DOCUMENT_TOKEN_TO_BE_REPLACED

To the editor of the Nupepa Kuokoa, The Pride of the Hawaiian Nation, Aloha oe:—Please give me some open space in your greatly cherished newspaper to insert some lines of reminiscences for my beloved lei that has gone on the road on which the whole world travels, so that his many classmates and big ohana from Hawaii of Keawe to Kauai of Manokalani will know.

My dear David was born in the coconut grove of Kaohai, Waikele, Ewa, Oahu on the 1st of March, 1889, and went to sleep the eternal sleep at 10:30 p. m. on the 4th of this July at Lahaina, Maui; therefore, he was 21 years old and some in this life.

My dear David was educated at the Kamehameha primary school when he was 8 years old, and he continued on in that same school, graduating as a well trusted student by his classmates and his teachers, and he was the president of the class of 1908. END_OF_DOCUMENT_TOKEN_TO_BE_REPLACED

Statement on Leprosy, and Resolutions

The disease of leprosy in these islands has assumed such an aspect, that it becomes our immediate duty to determine our course of action as pastors and teachers respecting it.

This loathsome, incurable and deadly disease has fastened upon the vitals of the nation. Although we hope and believe that it is not yet too late by the use of sufficiently stern and vigorous measures to dislodge its fatal hold, that hold has become fearfully strong. The numbers already known to be victims to leprosy, the still larger numbers who are undoubtedly infected, the steady, remorseless activity with which it is extending, all tell us with ghastly assurance, that unless remedial measures are used more effective than have been hitherto applied, our Hawaiian people will become in a very few years, a nation of lepers.

Do we consider what this means? It means the disorganization and total destruction of civilization, property values, and industry, of our churches, our contributions, our Hawaiian Board and its work of Missions. It means shame, and defeat, and disgraceful overthrow to all that is promising and fair in the nation.

We are on the brink of a horrible pit, full of loathsomeness, into which our feet are rapidly sliding.

The chief cause of our peril, is not, that God who has stricken our nation with this awful judgment, has placed no remedy within our reach. He has given a remedy, which the experience of wise men and wise nations has made certain. Nay, He has laid the rule down in the law given to Israel by His servant Moses. It is this; strict, thorough separation from us of all infected persons, not only of established lepers, but also of all who are reasonably suspected.

If we obey God’s leadings and follow this rule, our nation will be saved. If we do not, we are doomed to an early and shameful death.

Our great peril is from general ignorance on this subject among the common people, and their consequent apathy and perversity. They refuse to separate their lepers from them. They eat, drink and sleep with them. They oppose their removal and hide them. They listen to the voices of evil-minded men who raise an outcry against the King and his helpers, when they strive to root out the evil thing.

We therefore as pastors and teachers, as an association have a pressing duty. It is this, to teach and persuade all the people to obey the law of God, and separate the lepers from among us, and while striving to comfort and strengthen with the love of Jesus the afflicted hearts of the lepers and their friends, also to teach every leper who cleaves to his people and refuses to go away, that he is sinning against the lives of men and against the law of God. Therefore,

Resolved, That every Pastor and Preacher of this Association be instructed to preach frequently, and particularly to his people, upon the duty of isolating their lepers, especially as illustrated by the Mosaic law in the thirteenth chapter of Leviticus; also, that he use diligently his personal efforts to induce the people to perform this duty.

Resolved, To set apart the 18th day of July next as a day of Fasting, of Repentance before God for our sins, and especially for those sins which promote the spread of this disease, and also as a day of Prayer to God, to strengthen the King and officers of the Government in cleansing the land of this disease, and to turn the hearts of the people to help in this work of saving the nation.

Resolved, That the names of all the members of the Association be signed to this paper, and that it be placed in the hands of His Excellency the Minister of the Interior, who is ex-officio President of the Board of Health.