Something that Should be Done

Senator James Kealoha of Hawaii introduced a law into the Legislature to teach Hawaiian language in the government schools, and in schools that stand on land under the care of the Hawaiian Homes Commission [Komisina o na Home Hawaii].

The senator believes that by teaching children Hawaiian in the places shown above, for only Hawaiians live on Hawaiian Homes land, and it is right to teach them the mother tongue. This idea of the young senator is a fine one indeed. But in the mind of some people they do not believe that this is a very good bill to be supported by the other members of the senate as well as the house of representatives.

Thoughts expressed by some who are not Hawaiian is that this bill should be amended to whereby it is opened up widely and Hawaiian is taught at all government schools in the Archipelago.

If this young senator did not submit this bill, the thoughts of others would not have been known. END_OF_DOCUMENT_TOKEN_TO_BE_REPLACED

Territorial Secretary Charles M. Hite wants to have a bill put through the legislature eliminating the publication of the session laws in the Hawaiian language, claiming this is an “economy” measure.

Mr. Hite seems to be starting his so-called economy program in the wrong place. He probably doesn’t realize that there are still thousands of old time Hawaiians in the territory who cannot read English and who depend on the reports from the legislature through their own Hawaiian language newspaper, otherwise they won’t know what has been done by our law makers. END_OF_DOCUMENT_TOKEN_TO_BE_REPLACED

Outside of the islands of Hawaii, Maui, Oahu, Kauai, Lanai, Molokai, Kahoolawe, Niihau, Lehua and Kaula, that we are used to seeing as a part of what in Hawaiian is called “Ko Hawaii Pae Aina,” [The Hawaiian Archipelago], there are other islands included in that group.

The island of Nihoa (Bird Island) became part of Hawaii nei in 1822. This “annexation” [“hoohui aina”] was carried out by Kuhina Kaahumanu. “Keolaloa” (Capt. William Sumner) was the captain of the ship sent to carryout this task.

The island of Laysan became a Hawaiian territory [kalana aina Hawaii] on the 1st of May, 1857, and on the 10th in that same year, the island of Lisianski was joined into the Nation of Kamehameha by Captain Keoni Peti (John Paty). END_OF_DOCUMENT_TOKEN_TO_BE_REPLACED

Aloha will bring him back.

To the friends of the Kuokoa from Hawaii to Kauai; Aloha oukou:—

I ask for your kindness and patience, “To remember me.”—Should one of you see my younger brother named Kamakamohaha, please inform me by letter or perhaps by way of the Kuokoa. If he is on Kauai or Oahu, and if not there then on Molokai or Maui, and if not there, perhaps some area here on Hawaii. It is believed he signed a year contract. And if he is not here in this Nation, perhaps he went to the guano islands [aina kukae manu], or went whaling once again. For this younger brother of mine was a captive who was returned to Honolulu from one of the ships set ablaze by the Shenandoah [Senadoa]. He was found in Honolulu by his brother-in-law and his elder brother, but thereafter, he disappeared, disappeared without a trace. Where could he be? END_OF_DOCUMENT_TOKEN_TO_BE_REPLACED

Beached Fish.—We received a letter from “S. E. K. Hulililuaikeanuwaiokanahele” of Waikane, Koolaupoko, informing us of the beaching of a large Dolphin [Naia] at that place, on the 20th of this month. Its length was six feet, and its circumference was 12 feet; its flesh was eaten by the people, and its fat was burned for light. This is truly something new.

Stone Image [Akua Kii] of the olden days.—We have recently seen a stone image of a stone god of Hawaii nei, from ancient times. It is said that it is one of the famous kupua of Manoa. It is three feet tall, and has a lei around its neck; it is finely carved, and its appearance is similar to that of Hawaiians. It was taken however to Kahuku by R. Moffitt, Esq. [R. Mofita Esq.], perhaps as a companion to the kii that is at his place, whose name is Kioi. For that gentleman has a liking for curiosities [mea kupanaha].

THE HOPE FOR HAWAII.

YOUR WELL-BEING LIES IN THE FUTURE.

We have aloha for you; our hearts are fearful to see you like slaves in the future.

Consider carefully, O Children, and be steadfast in your aloha for the Land of your birth. You have no other Aina under the Heavens. None in the vast Pacific Ocean: You only have Hawaii; that is your home from your kupuna who have gone on before you. Be unified in your faithfulness, and teach Papa and Mama and Sister folk, to protest annexation, and to preserve our vote; for the Independence of Hawaii!!

*Here, “keiki” probably was referring to boys, as it often did, and that is why they were to instruct their “kuahine,” but today, 123 years later, I thought I would like it to address the youth in general.

When you hear the Strains of the National Anthem “Hawaii Ponoi,” men, remove your hats. It is a sign of your aloha for your land of birth, your Lahui, and your Monarch.

Teach our children to do the same. 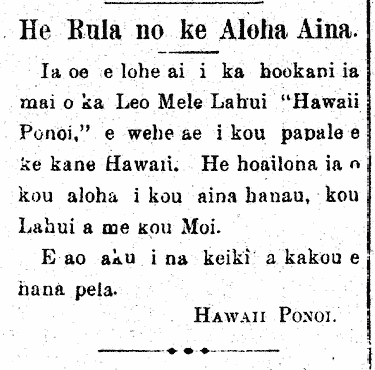 A CALL TO THE SUNDAY SCHOOLS ALL AROUND THE ARCHIPELAGO.

By the kindness of the Father, God, and Lord Jesus Christ, taken from the circle of our living was our dearly beloved father, Rev. L. Laiana, and he left behind his benevolent works for which our people are greatly indebted, as a monument [kia hoomanao] before our eyes, and before all of the Sunday School students around the Archipelago [Pae Aina].

Therefore, at the meeting of your Executive Committee [Komite Hooko], held on the 9th of November, at Kaumakapili, it was unanimously decided to erect a Marble Monument for the father, Rev. L. Laiana, and to enclose it in a fine iron fence.
END_OF_DOCUMENT_TOKEN_TO_BE_REPLACED

The Riders Expect to Have a Very Big Turnout.

The Association of Pa-u Riders, otherwise known as the Hui Holopa-u Maile Alii, is making great preparations for its parade of Pa-u riders on Monday, June 11. This society formed by Mrs. Kaimana [Kainana] Puahi and others interested in the preservation of the old Hawaiian manner of horseback riding with the picturesque pa-u immediately following the floral parade of Washington’s birthday, of which parade the pa-u riders formed one of the most attractive features. The ladies have since devoted much time to practice, and to the making of appropriate dresses, and have been helped by the members of the Promotion Committee, by Manager Charles Crane of the Hawaiian Gazette Co. and by many others, to all of whom the members of the Hui Holopa-u Maile Alii wish to return their most sincere thanks.

OBSERVATIONS OF THE DAY.

The program for the day is most complete. At 6:30 in the morning, the members of the hui will meet at the Waikiki residence of Mrs. Puahi, at which time all will don the pa-u. At eight o’clock the line will begin to form, Sheriff A. M. Brown being the marshal of the parade. At 8:30 the procession will move to the Kapahulu road, thence to Beretania street, thence to Washington place. END_OF_DOCUMENT_TOKEN_TO_BE_REPLACED