[On this, the 180th birthday of King Lunalilo, I am putting up this short and simple name song for him printed in the newspaper Nuhou following his election to the throne.

Great news in Hawaii,
The Kamehamehas are over,
The citizens have voted
Lunalilo is the King.
The throne is secure,
It cannot be stirred;
Rise, men,
Women, and children.
And congratulate and rejoice together,
For the Royal one, Lunalilo,
Their new King.]

Journey of the Alii, Queen Liliuokalani, to the Colony of Kalawao.

To the Editor of the “Daily Ko Hawaii Pae Aina,”

At 10 at night on this past Sunday, April 26, 1891, the steamship Likelike left the wharf of Ainahou, taking upon her deck beloved Hawaii’s favorite, to see the group of the lahui who are in pain and great suffering. There were three hundred or so people on this tour. Here are the  dignitaries who went:

The ocean was fine, there wasn’t much wind, but there was enough wind to carry the favorite one, landing before her makaainana who suffer in pain. The light of the queen of the night shown down beautifully; the wheel of the princess, the younger sister, Likelike [referring to the ship], pushed against the sea of Kaiwi, the beloved sea, like a child carried before the friends in misfortune; eyes searching the tips of the waves for land, with sorrowful tears for their birth land. At 6 in the morning, on Monday, April 27, 1891 they landed at the harbor of Kalaupapa.

The mast in the aft of the Likelike flew the crown flag, announcing here I am with a heavy heart for all of you. The town of Kalaupapa was spread out before us, from the seaside to the uplands, with cliffs surrounding, lined up on the west side of the town.

The land was astir with people at the harbor wanting to embrace with tears the Queen and her people; and likewise the alii, the Queen, and her people wanted to do the same. END_OF_DOCUMENT_TOKEN_TO_BE_REPLACED

Before getting to the pidgin phrase in question, I had a question in the last paragraph which in the original read: “ke hele la a mauakea i ka la.” And thankfully there was a response.

Aloha – the last line might be missing an “o” – Ke hele la a moauakea i ka la – making a haughty display- like white-feathered chickens – in the sun. (moa uakea – often a reference for Maunaloa/Maunakea when snow-covered)

That would fit in nicely, considering there were typos in the newspapers even back then. The last paragraph would then read something like:

The white-haired old men of Kalaupapa are out surfing these days, resembling white-feathered chickens under the sun.

There was one suggestion.

“Go come you bloody kanaka. You wanna fight. I am strong. Me give you good blow, me is invisible [? invincible] man.”

Another suggestion I have is maybe:

“Goddam you bloody kanaka. You wanna fight? I am strong. Me give you good blow. Me Englishman.”

Also there was another comment just a few minutes ago!

In our Cummings Ohana I have written of many of our ancestors exploits. But these long overdue articles brings to mind an early story of our Patriarch Thomas Booth Cummings who was so inspired by a hapa Hawaiian who served alongside of him in the jury pools of Edwin Miner’s court in Lahaina (1848-50) that he named his first born son after him. The young man who had such a promising will to help the needy was William Humphreys, who often went by the name Ulawalea as a pen name when writing the countless articles in Hawaiian Nupepa about the injustices of the peninsula. Kalaupapa has received much of the attention, in part from Father Damien. However, there was a second smaller colony at the eastern end of the peninsula at Kalawao. Most patients here were Chinese, and this is where Humphreys concentrated his efforts in the early until his untimely death from a prescribed medicine in the mid 1860’s. He might have been one of the first to use the media of his day to educate those in the islands that were unaware of the seriousness of the conditions. At Kalawao he organized voting blocks, book clubs and taught many years for no expense. He served two terms as Sheriff and was imprisoned twice, once for refusing to arrest patients for victimless crimes and another for butchering beef on a nearby ranch to provide fresh meat for the starving. He like many others, worked under the radar and was but a small foot print in Hawaii’s history, but when passed the patients of Kalawao lost their dearest friend.

Mahalo to everyone that gave responses, they put much more meaning into this post!

O Greatest Prize of the Hawaiian Nation, the lightning that flashes over the cliff brows of the islands. Greeting between us.

In the area of Puuhahi, Kalaupapa, Molokai, there were deplorable incidences, and those where these. There was sweet potato being fermented in pots, and this made the dormitory into a place of fighting because of drunkenness, along with the speaking of these words:

These are people who were appointed with positions from the Board of Health [Papa Ola] with the thought that it would be of help. Then this reprehensible thing happened between the locals [kamaaina] and the leprosy patients.

The gray-haired old men of Kalaupapa are surfing these days, and the land is being left fallow in the sun [??? ke hele la a mauakea (?? mahakea) i ka la.]

To the metal type-setting boys goes my aloha.

[Any ideas what is being said in pidgin? I will post what I think it says tomorrow morning.]

Leprosy patient escaped.—This past Tuesday, Dr. Hoffman [Kauka Hopemana] went to see the leprosy patients at the hospital in Kalihi. When he arrived, he was told that one of the patients escaped, and ran away, and it is not known where he is hiding. It is thought that he boarded the Kilauea on Monday evening, but if that is not the case, where could he have gone. It would be best if he is returned within his confines should he be found, or he will be lost, and that will be very dangerous. 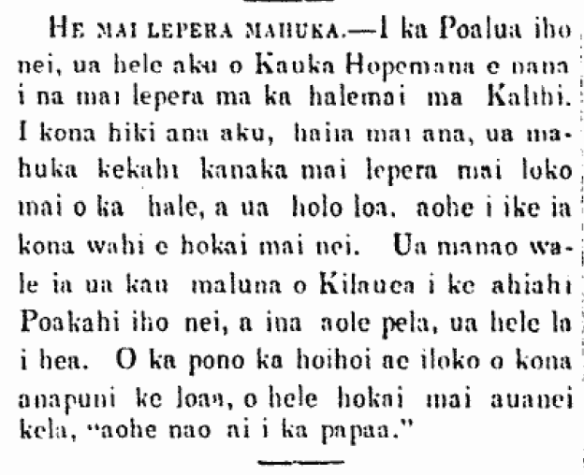 [I hardly hear this being sung today, but it is such a fun song!] 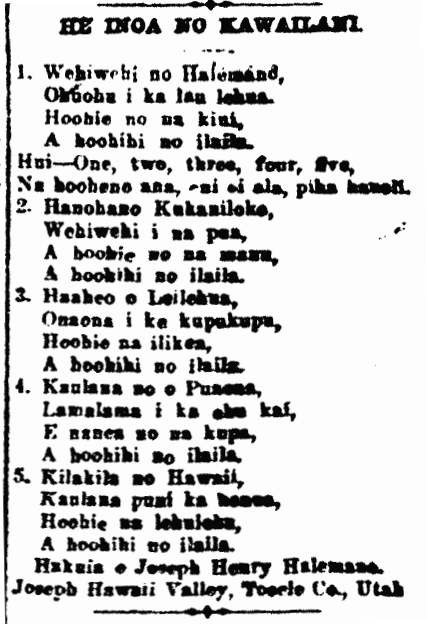 Solomon Hanohano, Editor of the Kuokoa, Aloha oe:—Because we want to know of the news from our birth lands, we decided to subscribe to the Kuokoa. As the new year is arriving, it would be a means for us to see the news of our home and the progress of the political scene or its regression, as well as the victories or discouragements of our fellow makaainana.

This is an important year for the country, being that the great power of the nation has gong to the Democrats; the important question is this: Will the poor citizens of the land really benefit, or will they once again perhaps drift about like during Cleveland’s presidency, but it will be time that tells.

If those who were elected actually carry out what they promised with their lips to the people, then benefits will indeed result, however if it is like what Isaia said: “This people draweth nigh unto me with their mouth, but their heart is far from me.” Then those words of that old kamaaina of Lahaina will appear: “He says, when oh when will that happen.”¹ Recognized are the wealthy, and ignored are the poor. [Ikeia aku la no na kii maka nunui, nana oleia iho la na wahi kii maka liilii]. END_OF_DOCUMENT_TOKEN_TO_BE_REPLACED

I thought I would ask once again for people to maybe take some time to add corrections to misinterpretations that I make in these posts. I know for a fact that there are a lot of times that I may think that something is being said, but it actually is not. It would help me for one, and it might perhaps help others as well.

Also, if you have any comments or added information to contents of posts, please feel free and don’t hesitate to comment.