Because of the desire to liquidate the story book of Kaluaikoolau which are stacked up in the publishing office, one of those books will be given away for free to each person who buys the Kuokoa directly from the office of the Hawaiian Gazette Company, beginning this morning.

[Up until this time, the books were going for 10 cents each, if you picked them up at the Hawaiian Gazette Co. office, or 15 cents if you wanted them sent to the country. See ad below.]

Can be picked up at this Office for 10 cents, or they will be sent to the country for 15 cents.

Here is Kimo Olo [James Auld], a native Hawaiian who is a familiar with the printing profession, who is suffering from a stroke [mai ano lolo ?].

[At least we know from this article that the newspaperman, James Auld, is still living in 1895.]

It is interesting to note that newspaperman, James Auld, who was responsible for the Kuokoa 1/1/1862 color image of the Hawaiian Flag was the son of Andrew Auld, who arrived from Scotland in 1816. And that this Andrew Auld was apparently dear friends with none other than fellow Scot, Capt. Alexander Adams, who captained the Kaahumanu (formerly named Forrester) for Kamehameha I. Adams is traditionally credited for designing the the Hawaiian Flag.

And James’ brother, William, who we spoke of earlier as the engraver of James’ wife’s (Uwinihepa’s) tombstone, was perhaps more importantly one of the four men sent to take the Anti-Annexation Petitions to Washington D. C. Oh! and William marries one of the daughters of Capt. Alexander Adams, Mary (9/21/1859). Both James and William seem to also go by the last name Andrew/Andrews.]

[Found under: “This and That”]

This Thursday, at Moanui, Molokai, Miss Blanche Dudoit and Charles Kuhio Lewis were bound together in the holy covenant of matrimony. Mr. and Mrs. Kale Kuakua [Charles Dudoit] sent out invitations to intimates and friends to a party held at 2 in the afternoon there. This is one of the daughters of Kiule Kuakua [Jules Dudoit], and the husband is one of the sons of Mrs. C. Pehikulani Auld, the wife of Kimo Olo [James Auld].

[I am not sure if this is James Auld, the newspaperman, or another generation. Anybody have birth and death dates?

There are many Hawaiianized names like “Olo” for “Auld”, and “Kuakua” for “Dudoit”. There should be a site that lists them in one easy to look up format!] 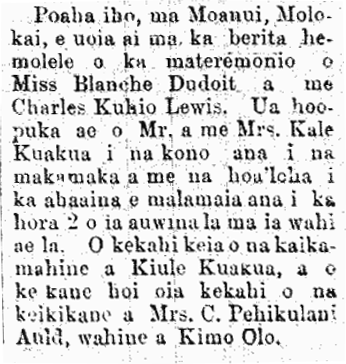 [Found under “The News”]

We saw the stone carved by William Auld for the Grave of Mrs. Uwinihepa Auld, and it is admirable. Those imported are not better, and it was not more expensive. This Hawaiian is in Hawaii, and he is not far away if looked for.

[And once again, it astounds me what you can find online… William Auld [older brother of James Auld] apparently was very talented as seen by the tombstone still standing today.]

With regret, grief, pain and sorrow, we announce the sad news whose heavy burden has fallen upon us to tell the relatives, intimates, friends, and the masses, about the passing and the going alone from the field of suffering of this life [hele kohana aku la ma kela paia o na inea o keia ola ana ?], on the morning of this past Tuesday, the 6th of June, at her home on the corner of Beritania Street and Queen Emma Street, of Mrs. Uwinihepa Auld; the wife and companion in the hot distant days, and the cold misty nights of this royal town, of our good friend stricken by grief, and a fellow Printer, and one who has shared in the toils of other endeavors, that being Mr. James Auld.

Mrs. U. Auld was born within the limits of this royal town on the 16th of November 1842 and she lived peacefully and comfortably, and she passed at 34 years and a few months. She left behind a husband with a heavy responsibility of three children, the offspring of their loins which she left behind, as well as many friends. Yesterday afternoon, there was a funeral procession where she was accompanied on a bier to where she was laid to rest as spoken of earlier [although it seems that they do not mention the graveyard], and “dust shalt return to dust.”—(Rest in Peace.)

[This is why i knew “Uwini” in the previous marriage announcement article was an abbreviation for “Uwinihepa”.]

MARRIED.—On Saturday evening, the first day of this month, James Auld was married to Miss Uwini Taihuna, the youngest daughter of Taihuna and Wahinekapu. There were many friends who went to see the wedding. There was a party at their house that evening, on Nuuanu Avenue, after they were joined by the gentle tie of marriage. With those who were filled with joy are the warm thoughts and hopes that they will be blessed from the people who print this paper.

THE KUOKOA.—The number of this native paper for January 1st, appeared on the last day of December, and was warmly greeted by the native population who are in ecstacies over it. Indeed they have good cause, for as a specimen of the typographic art, it will compare favorably with any paper published anywhere in the world; and this in a land which forty years ago was peopled by savages. Surely they cannot now complain of a want of good newspapers and plenty of news; and we judge they value the Kuokoa, for they pay in their subscriptions for it with a cheerfulness and promptness not exceeded by foreigners. In order that our subscribers who are not versed in the language may have some idea of its contents, we will state here what they are:

1st page.—Song to the New Year,

The Hawaiian flag, with its history and a song.

Account of one of the Battles of Napoleon I.

A song to the Kuokoa.

The Mexican troubles and threatened invasion by Spain, &c.

Arrest of the Rebel Commissioners Mason and Slidell.

A Lamentation to Mrs. Martha Ii.

The above will give an idea of the contents and matter of the native paper. But to appreciate the change from the old style of newspapers prepared for them, foreigners will have to read for themselves. Some of the communications are as keen, sharp-witted and sarcastic as any productions in English, while some few of their meles or lamentations, abound in illustrations of poetic beauty and thought. The lamentation to Mrs. Ii, on the fourth page of that paper, written by her brother at Hilo, is such. The Hawaiian flag printed in colors, and the new heading, attract general attention. The paper will serve as a curiosity to send abroad, and we notice that many are procuring copies for mailing. It will do more to give our nation and flag a notoriety abroad, then a dozen of Mr. Wyllie’s proclamations of neutrality.

[There actually was a replica done of this issue of the Kuokoa by Hoolaupai: Hawaiian Newspaper Resource (which currently either lies dormant or has gone defunct). I heard word that it was going to be reprinted once again a number of months ago, but it seems that did not happen…]

A BEAUTIFUL NUMBER.—The next issue of the native newspaper Kuokoa—the number for January 1, 1862,—which will appear on Monday next, will be ornamented with the HAWAIIAN FLAG, printed in colors—red, white and blue. As printed, it will afford a specimen of the typographic art, seldom seen in any country, and will be a curiosity worth mailing abroad. Indeed, we have never seen a national flag worked off in three colors in a newspaper. When to this we add, that the engravings were made and all the printing done by native Hawaiians, those who see the paper, with the Hawaiian Standard floating in it in colors, will participate with us in the pride we feel at the successful execution of this difficult job. The name of the young man, to whom we are mostly indebted for the engraving and successful completion of this word, is JAMES AULD, a Hawaiian, who has served his apprenticeship in our office.

—The Kuokoa is rapidly increasing in popularity with the natives, and now numbers nearly 3,000 subscribers. The present edition is about 3,500 copies. Copies can be had for 12½ cents each.

[The added information of James Auld here shows that it is important to not only get information from the Hawaiian-Language Newspapers, but the other language papers hold good information as well!]