Stone Image [Akua Kii] of the olden days.—We have recently seen a stone image of a stone god of Hawaii nei, from ancient times. It is said that it is one of the famous kupua of Manoa. It is three feet tall, and has a lei around its neck; it is finely carved, and its appearance is similar to that of Hawaiians. It was taken however to Kahuku by R. Moffitt, Esq. [R. Mofita Esq.], perhaps as a companion to the kii that is at his place, whose name is Kioi. For that gentleman has a liking for curiosities [mea kupanaha]. 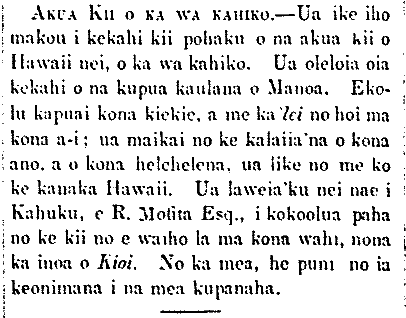