For the past year,  there has been no word to his family, and they did not know whether he was dead or not. However, during the past couple of weeks, a letter arrived written by him from Britain.

Four years ago, George Healii Kahea Beckley left Hawaii for America. in 1914, he departed America aboard the steamship Missourian, full of mules to take to France for the armed forces of Britain.

He got off the ship in France, and entered the battlefield with the British Army; he was shot and returned to Britian.

After he recovered, he joined the war once again on the east side at the Balkans and Salonika; there he again faced injury: he, a friend, and his cousin Hoapili from Hawaii. The three of them were returned to Britain to the Hospital.

Thereafter, he was not heard from again, but last week, his cousin, Leander Beckley,  of the group of car drivers of Fort Street, received a letter from him.

The letter was written on the 22nd of December, saying that he was in Britain, and in good health. He is awaiting his discharge, and then he’ll return home.

[I am not sure about the first reference to “four years ago” and then “1914”… Also, does anyone know who this Hoapili refers to?]

Dear Papa:–Here are some words for you; my wife and I are healthy, and we are believing that you and the family are doing likewise. My dear wife is completely cured of her sickness, after I put great efforts into finding a cure–partly as a result of the doctors and partly because of the Lord Jesus Christ–as I prayed all the time to the Lord to give health to my wife, as you instructed me earlier.

She was sick for 12 weeks from the time she gave birth, and because of God’s love she regained her health. I take her walking around every day for 2 hours, and she is beginning to eat and regain her weight.

Father, I have joined the armed forces, as I told you earlier. The doctor gave his permission, and I received my papers, to the regiment #30, of married men, under the command of Lord Derby. I wear the symbol of my regiment on my left arm, just as other soldiers do in the army of Britain. I will receive my orders in June or July to proceed to the battlefield without delay for the honor of the Hawaiian people and for the flag of the homeland of my beloved wife.

We will send you a picture on the next boat, and when I receive my uniform, I will send you a picture, and that will be my last picture for who knows how long, but I find my relief in God. Tell August Kekona, don’t come to this land; there are no jobs, no money, there is lack in daily needs; tell him to go to America because it is a land where you can make it, where you can make money and get other things to make you happy. I say this because I was there for many years. Tell him my advice. I am thinking this is enough writing for the time being. Papa, give my love to Kuku Makalohi and uncle, Mrs. Lonohiwa, Bro. August and Hugo Kekona, and the rest of my love, to you my Papa. You son,

Aloha Papa:–Here are some thoughts to you, those being these: I am doing well, I am over my sickness, because of the tireless efforts of my loving Daimana for me.

Papa, tell August Kekona, don’t leave Hawaii. If he listens to my advice, he will be happy; he should live in Honolulu with you. There is no work for men here; women work, and take care of their husbands. Women are more than half of the workforce here in Britain now. Also, the pay here is very low. Papa, you are probably puzzled that my Daimana has joined the 30th regiment of married men, under the command of Lord Derby. I believe that this war is one of the worst; I am very afraid. There will be many more casualties of the men joining this war–both from the Allied side and the German side, before the war is over.

Daimana and I sent our picture to you, but my picture isn’t so good because I have just recovered from my sickness. I will go again later to take a picture and send it to you. I look at my picture and it is as if I am a totally different girl. I think I will end here. I wish you and everyone there the best in this new year. Papa, don’t forget to give my aloha to Mrs. Lawe Lonohiwa (I will write her when I have some time). Give my love to August Kekona. Your daughter,

A Son of Hawaii Goes to War for Britain

This picture was sent from Britain giving notice that Diamond Kekona, a Hawaiian, was enlisting in the Military of the homeland of his wife, Britain. He is prepared for when he will be called to service. Those in the picture are Mr. and Mrs. Barker, Mr. and Mrs. Diamond Kekona, and Mr. and Mrs. Smith. One of the women is an older sister of Mrs. Kekona’s. And one of the men is their brother.

[When i was posting to the old Hoolaupai Face Book page, there were many letters sent by Diamond Kekona from England to his father Dick [Richard Kekona] which were posted. If anyone wants to see them reposted here, where they will be easily searchable, i can do that. I will post the first letter i found in the papers right after this as an example.]

ON THE LOSS OF THE KINGDOM.

Here are the documents illuminating how the Kingdom was lost to the Queen of Britain. The 25th of February was the day the cession was proclaimed.

[See on Google Books: British and Foreign State Papers, starting on page 1023. These correspondences were translated from English into Hawaiian, and from Hawaiian into English by Gerrit Parmele Judd (Kauka), the Secretary and Translator of the Kingdom.] 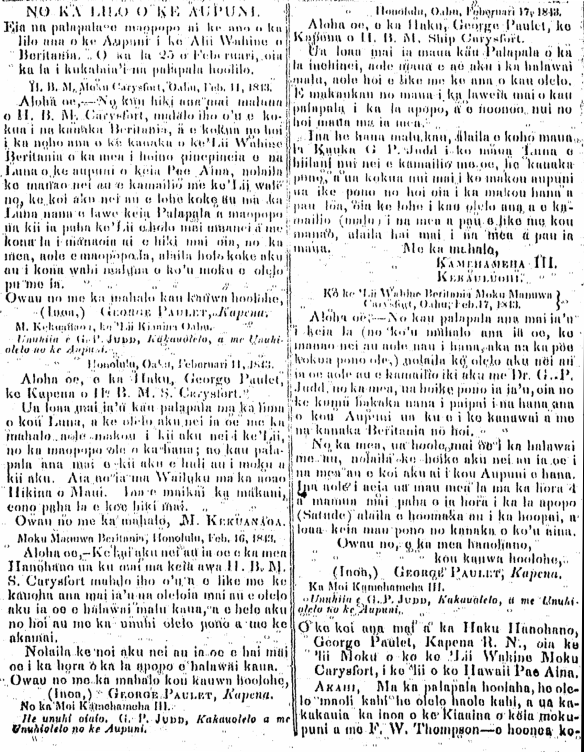 On the 10th of this Feb., the British man-of-war arrived here in Honolulu; the name of the ship is Carysfort; it is a large ship and yet is here in the harbor. Paulet is the name of its captain.

Here is another thing; the captain of this warship is not here with good intent; he did not fire his guns in salute; it is said that the problem is because of the denial of the new British Consul by the king. The King was sent for to come, and then they’d work it out. The haole here are having minor demonstrations in response to the ill will of the warship captain.

[An article found on Chronicling America]

So too was this past holiday, the 28th of Nov.; there was no work done on Oahu, as it was a day of rejoicing for the independence of this Kingdom.

At 12 noon, the cannons rang out, the naturalized haole held a party at [Mau…lika?] and the King held a banquet at his [?] with his alii and the young alii. The doors of the palace of the King were opened, and crowds of haole and [?] came to see him. Present was the American Consul in his beautiful attire as well as the Consul of Denmark.

Early in the morning of that glorious day, the King and some alii entered the hous of Jehovah as well as many of the public, to give thanks to the one to whom the nation belongs. This was as it should be, for Jehovah is the Head of Monarchs of all kingdoms, who cares for and who overthrows, from who comes protection and independence of a nation, [?] and the people rejoice in him. Should this nation, Hawaii, be blessed, the glory goes to God, and not upon the alii and man.

At our assembly in the house of God on that happy day, the Pastor spoke on this topic.

“For Israel hath not been forsaken,
“Nor Judah of his God, of Jehovah of hosts,
“Though their land was filled with sin against the Holy One of Israel.”

The lesson of this passage was, ‘There are many sins committed by the people and alii of Hawaii, and yet God has not forsaken them.

God sees the drinking of alcohol, the fornication, evil deeds on his sacred day, the worshiping of idols, the fighting, the the overburdening, the snatching, the stealing, the lying, the indolence—and yet God has not forsaken you; he is patient and gives blessings. This nation was near lost, but was held fast by God who returned the rule of the land, and his nation is expanding, along with his righteousness and grace, from one corner of the land to the other.

Therefore we must acknowledge Jehovah, and always give him praise, and listen to his voice. Don’t just boast of the independence of the nation, but act intelligently and righteously. Leave laziness behind and work, and ward off all evil things and hold fast to the things which will elevate this independent nation. And then God’s blessings and patience will be worthwhile.