Charles Reed Bishop, a builder of Hawaii in the field of education as well as business during the 19th century, and who arrived in the Hawaiian Islands 100 years ago this week, on October 12, 1846, will be remembered at centennial services at the Kamehameha Schools Friday and Saturday. END_OF_DOCUMENT_TOKEN_TO_BE_REPLACED

He was a True Kamehameha

The story printed in the Kuokoa pertaining to the death of Samuel Kekuiapoiwa on the 23rd of June past on the shores of Hanapepe; that he was well known for his good deeds and there was a expression of love for him in our Kilohana* on July 17; he was none other than a descendant of Kamehameha V. This is his whole name—Kapuaiwa Kamehameha V Kekuiapoiwa.

KNOW YOU ALL BY THIS Announcement; prohibited totally is the catching and the killing of Oo and Mamo birds living on the personal lands of King Kamehameha V, and from this day forward, no Oo is to be injured or killed on the lands of the Monarch; not by using lime [ke kapili kepau ana], not by snaring [ka ahele puka kaula], not by shooting [ke ki pu ana]; it is totally kapu. The person or persons who go against the words above, they each can be prosecuted.

[Might any of you law people know if there were any Kingdom laws on the books that outlawed the catching or killing of native birds? I have seen laws prohibiting the killing of non-native birds, but not native birds.]

Birthday of the Alii, the governess of Hawaii.

On the 9th of February past, a banquet was held on the estate of Hulihee by the person whose birthday it was, R. Keelikolani, assisted by her dear makaainana remaining, and her personal attendants; there was much food prepared by the one whose birthday it was, this being the very first celebration of her birthday; and it was appreciated for the calmness of the day. There were many gathered to celebrate her day of birth, with their gifts for that day, and at 2 o’clock, the feast began, followed by Hawaiian entertainment [lealea Hawaii] furnished by the one whose birthday it was. Here are is the main thing which I saw and all of us as well, that being the skill of the person who instructed the entertainment [o ke akamai o ka mea nana i ao i ka lealea], and this was followed by a joint choir of the sweet-voiced children of Holualoa; we and they give praise to the excellent leadership of Aalona; but this is what I did not like the most, along with my friends who stood with me, that being the guiding of some children to stand up and go astray [eia nae ka’u wahi hoahu loa, a me ko’u mau hoa e ku pu ana, o ke alakai ana i kekahi mau keiki liilii e ku iluna e lalau ai], and for that some women went and “kissed the nose” [honi i ka ihu] of the small children who were probably no more than ten years old.

[Many times people will be referred to by their position and not by their actual name. When doing searches for Keelikolani for instance, she is often referred to as the governor of the island of Hawaii, ke kiaaina o ka mokupuni o Hawaii (1855–1874).]

There was a Baptism at the Residence of the Honorable C. R. Bishop, “Haleakala;” baptized was the child of the honorable R. Keelikolani and J. Y. Davis, and he was called, “Keolaokalani Paki Bihopa.”

The Honorable C. R. Bishop and Pauahi (the wife of Bishop) were those who bestowed the name, and Rev. C. Corwin is the one who performed the baptism. 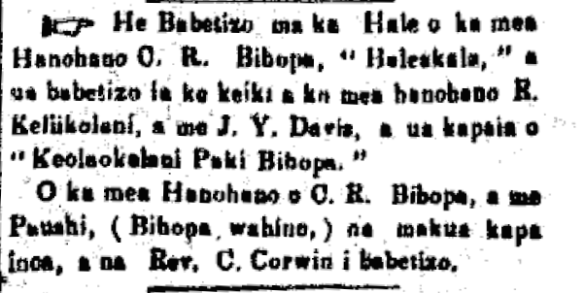