I send you some news; that is news about dogs from Hawaii nei. We are used to hearing about and seeing haole who have smart dogs that obey their words, but when I saw this, these Hawaiian dogs as well, they are clever dogs. END_OF_DOCUMENT_TOKEN_TO_BE_REPLACED

Bird catching.—We received a letter from T. P. Kaaeae of Hamakua, Hawaii, telling that the men and women of that place are going up into the wilderness in great numbers to catch birds. END_OF_DOCUMENT_TOKEN_TO_BE_REPLACED

Hawaiian Birds.—A letter from Hilo says: “There is in this town a beautiful collection of Hawaiian birds, finely preserved. It would be a valuable acquisition to the Government Museum, if Mr. Mills, the gentleman to whom it belongs, and who has been some years and at considerable expense in the work of collection, would part with it. Among the specimens is one called ‘the wingless bird,’ now nearly if not quite extinct on these islands. They are, however, numerous on Wake’s and Laysan [Laysin] Islands, where I have seen them, and supposed they were a new species. The body is about the size of a pigeon’s, they have no feathers on the flipper-like wings, and they run with such speed that one would take them for rats at first sight.”

[I wonder what became of this collection. Perhaps they went to the National Museum and then to the Bishop Museum. And it seems that among the different upcoming exhibits at the Bishop Museum is one on birds!]

The Office of Price Administration [Mahele Kau Kumukuai] set the top price of fishes for the island of Hawaii, and it is seen here below:

Some fish prices rose a little, and some decreased.

We see that the price of some fish are indeed low while some are higher. We have no criticisms about some, and over some we will just keep our mouths shut, for that is under their control.

Know you fishermen the prices shown above, so that you know the prices of all the different fishes, lest you go beyond it and end up without profit.

KNOW YOU ALL BY THIS Announcement; prohibited totally is the catching and the killing of Oo and Mamo birds living on the personal lands of King Kamehameha V, and from this day forward, no Oo is to be injured or killed on the lands of the Monarch; not by using lime [ke kapili kepau ana], not by snaring [ka ahele puka kaula], not by shooting [ke ki pu ana]; it is totally kapu. The person or persons who go against the words above, they each can be prosecuted.

[Might any of you law people know if there were any Kingdom laws on the books that outlawed the catching or killing of native birds? I have seen laws prohibiting the killing of non-native birds, but not native birds.] 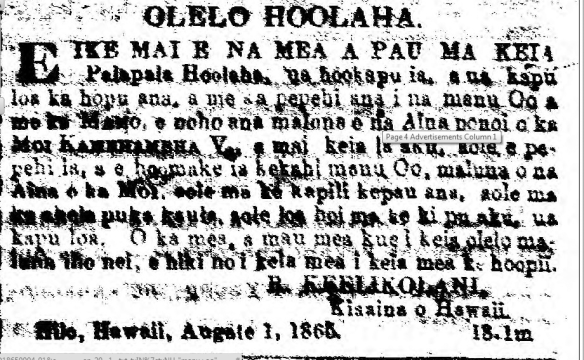 We received word from the news released by the Hui Manuihi [?? Audubon Society ??] that there are now at Kilauea many apapane birds, and it is the one bird that is most widespread there.

Just like the work of those who research all sorts of things, there are some who made a move to study the different birds, and not only in other places, but here in Hawaii as well.

The activity of these people on Kilauea was to go into the forests to look at the Hawaiian Birds that are spread out there, and by them travelling the narrow paths in the Bird Park and entering into the Golf course and reaching the Soldier Camp at Kilauea and then arriving at Kilauea Iki; there were more Apapane than all the other birds put together.

With the research of the rangers of Kilauea National Park, they saw there was a large amount of bugs on the trees these days and that is was has caused an increase in the birds, for that is what the birds eat.

The number of kolea decreased and the mynah [piheekelo] birds are less, and it is believed because of the great cold.

Other Hawaiian birds seen at Kilauea these days are the amakihi and the elepaio.

Therefore according to this report shown, Hawaiian birds are indeed numerous, and the apapane is the most abundant.

Mr. Lydgate over on Kauai, recently saw a specimen of the native Hawaiian bat which was supposed to be extinct. There are other kinds of bats on Kauai and elsewhere, that are neither rare nor extinct.

By the W. G. Hall of last Wednesday, Mr. F. L. Clarke received from Mr. C. N. Spencer, of Hilea, a good specimen of a Hawaiian bat. The native name is “Opeapea” or “Olepe.” The specimen sent measures 6 inches from tip to tip of the extended wings. The body is about the size of that of a mouse. The ears are quite large in proportion to the head. The profile to the little fellow shows a “snub” nose, retreating forehead and wide mouth, in fact, it may be called an “ugly mug.” The specimen is preserved in alcohol, and will be placed in the National Museum. 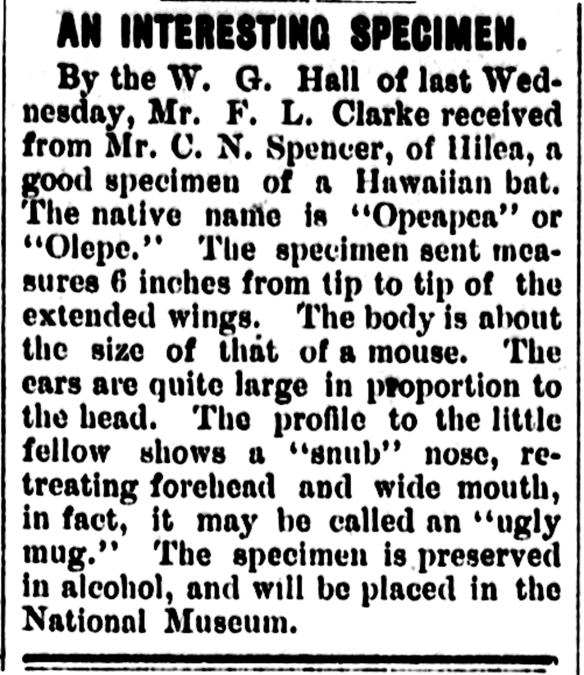 THE HAWAIIAN OWL.  Photo by Williams.

A NEST of four baby owls was discovered about three months ago by Dr. George Huddy in the Kalihi valley behind his residence. The discovery of the quartette of owlets is important in that few of the species have been found in late years. Three of them died shortly after being taken into captivity, but the oldest of the lot lived and is growing into a fine bird, and is at present about the size of a small pullet. He is thoroughly domesticated and makes himself perfectly at home in the residence of Dr. Huddy, mingling with the people without fear.

The three dead ones were taken in charge by Mr. Bryan, Professor Brigham’s assistant at the Bishop Museum, and they are now stuffed and form a group with one brought to the museum about four years ago. It has been said at the museum that the owls are exceedingly rare and are valuable in the preserved state for the museum.

The pet eats mice as well as raw meat. Dr. Huddy was quite troubled as to the manner in which the owl digested the bones and was rewarded a short time ago when the owl retired to a corner and began retching. Soon a quantity of bones issued from his throat, and the youngster then resumed his eating of further food.

The owl is of the “horned” species. When approached by some one he does not know two groups of feathers on the back rise upward in a threatening manner and remain in that position until the stranger retires. If it is some one he knows the feathers fall back and he courts their attention.

The owner of the rare bird states that none of his family have known of the existence of such owls in the Kalihi valley for the past forty years. They were at one time plentiful. The native for the owl is pueo. When fully grown it is the size of a large hen or the alala, or crow. Its feathers are mottled, its eyes exceedingly large and the claws are sharp like those of a cat. In appearance the owl’s head is very much like that of a cat. It catches mice, small birds and young chickens, on which it lives. The feathers were formerly made into very handsome kahilis.

In ancient times the owl was thought to be a god and was worshipped by multitudes. Some families looked upon the appearance of an owl near their habitation as a warning of approaching death; others as the coming of good luck. On the hills back of Kalapu, in Manoa Valley, beyond the bluff on which the Castle residence is located, owls once inhabited the caves in great numbers.

One of the legends of Manoa Valley gives the owl great prominence as god. The legend of Kahalaopuna shows that the owl was looked upon as such, a certain owl being known as the guardian of the beautiful maiden.

[Does anyone know of kahili made with pueo feathers?] 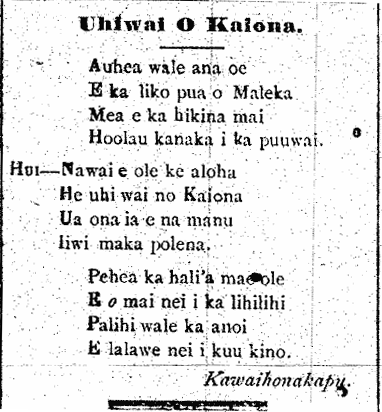