The Chiefs. The Chiefs landed in Kailua on this past  15th of May; there was a 22-gun salute.

Puhi was tried for murder at Kau, earlier, and he was found guilty, pertaining to murder. How sad is the end of those who do wrong! END_OF_DOCUMENT_TOKEN_TO_BE_REPLACED

—On the 30th of April another case occurred near Hanalei, Kauai, which, though it did not result in murder, shows that the natives are rapidly progressing in all the attendant arts of civilization. A colored man of Wainiha, named William Hodges, and a married man, END_OF_DOCUMENT_TOKEN_TO_BE_REPLACED

Attempt at Strangling.—We learn that on the 30th ult., at Wainiha, Kauai, a colored man, named William Hodges, narrowly escaped being strangled by having had a lasso put around his head, while asleep, by parties operating from outside the house, assisted by some one of the inmates. Investigation of the parties is now being held.

—On this past 30th of April, while a black haole, William Hodges is his name, was sleeping with another man in his house; his neck was placed in the loop of a lasso by his wife, END_OF_DOCUMENT_TOKEN_TO_BE_REPLACED

Petty Theft.—Yesterday Frank Bezena, age twelve years, was arrested for stealing spring balances from George Wreford, butcher. He was convicted and fined $10, which was paid for him. A Sandwich Islander, END_OF_DOCUMENT_TOKEN_TO_BE_REPLACED

Honolulu,  Nov. 1—One of the most heinous acts was carried out by some people who know nothing of honor, or who know no fear of doing evil, by them breaking down the door of the Crypt of King Lunalilo at Kawaiahao, END_OF_DOCUMENT_TOKEN_TO_BE_REPLACED

THAT MURDER AT HAMAKUA.

The body of the Japanese doctor* Goto at Hamakua was found dangling, killed by unknown people; news was received this week that three haole sugar plantation workers suspects were arrested, and they are being brought from Laupahoehoe aboard the Kinau to be detained at the Hilo jail.

By the kindness of Mr. J. Kaulahea, we received the letter below from one of his friends in Honokaa:

The news of Honokaa nei is that a Hawaiian and haole are being arrested, suspected that they beat and hung the Japanese from the telephone pole.

These are who were arrested and taken to Hilo: 1 Hawaiian and 3 haole. However the arrests amongst the haole are not over. END_OF_DOCUMENT_TOKEN_TO_BE_REPLACED

Because Charles Santos, Portuguese, caused harm upon Wong Ping, a Chinese who is employed at the office of immigration [keena hoopae limahana], he was fined ten dollars on this past Monday before the Police Court [Aha Hoomalu].

This Portuguese man was arrested previously for punching and breaking the jaw of another, and he spent ten months in Kawa for that crime of his, and ten more dollars for this further injury.

Wong Ping and a friend of his and the daughters of this friend were watching a slide show [kii hooleleaka], and from there they went to eat ice cream [aikalima] at the Japanese shop. END_OF_DOCUMENT_TOKEN_TO_BE_REPLACED

We have received from P. R. Holi of Kauai, a response to the Elele, and what it published about him; this is his response which we accepted with great import: It is true, it was my friend and I who brought Kamahueeu, a person inflicted with leprosy [mai pake], and some other sick ones from Hanapepe without any problem to Lihue to the Sheriff [Makai nui], and then after completing this duty for him, I returned home; it was not me who caused him harm, it was some other officer; therefore, the Elele was totally misdirected in its publishing this, and the one who wrote the story was mistaken.

[Hopefully the missing years of the newspaper “Ka Nupepa Elele” (1879–1885), which includes the year the article referred to here appears, will not be missing forever! Might anyone have any ideas where these might be found?

It also should be noted that responding to a news article appearing in one newspaper in another paper like the response above, was a very common practice.] 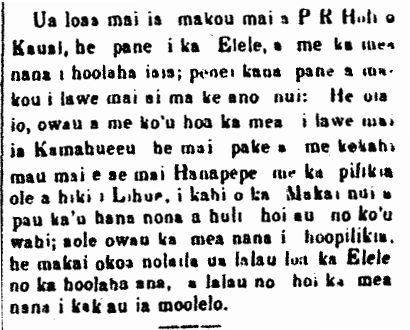