“Be it known to all whom it may concern, that we, Kamehameha III, King of the Hawaiian Islands, hereby proclaim our entire neutrality in the war now pending between the great maritime powers of Europe; that our neutrality is to be respected by all belligerents to the full extent of our jurisdiction, which by our fundamental laws is to the distance of one marine league, surrounding each of our islands of Hawaii, Maui, Kahoolawe, Lanai, Molokai, Oahii, Kauai and Niihau, commencing at low-water mark on each of the respective coasts of said islands, and includes all channels passing between and dividing said islands, from island to island; that all captures and seizures made within our said jurisdiction are unlawful; and that the protection and hospitality of our ports, harbours and roads, shall be equally extended to all the belligerents, so long as they respect our neutrality.

“And be it further known, to all whom it may concern, that we hereby strictly prohibit all our subjects, and all who reside within our jurisdiction, from engaging either directly or indirectly, in privateering, against the shipping or commerce of any of the belligerents, under the penalty of being treated and punished as pirates.

“By the King and Kuhina Nui: 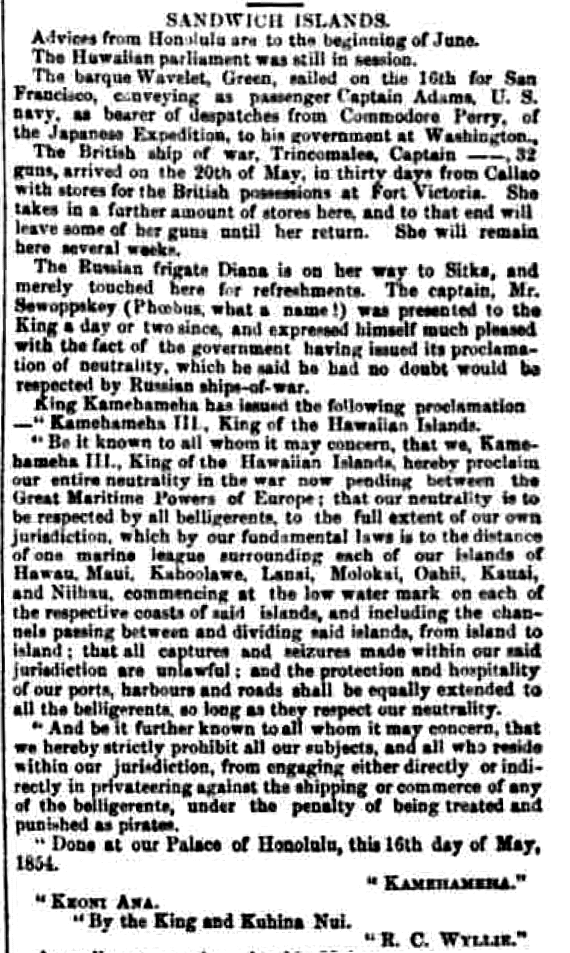