HAWAIIAN CRAFTSMANSHIP—Participating in the YWCA’s Hawaiian afternoon next Saturday will be from left, Mrs. Amelia Guerrero, Mrs. Anne Teves, Mrs. Harriet Burrows and Mrs. Eugenia Logan. The annual event will be held at the Ala Wai club house for the benefit of the World Fellowship committee.

Hawaiian craft demonstrations and entertainment will be featured at the Young Women’s Christian association’s annual event, A Hawaiian Afternoon, next Saturday. Sponsored for the benefit of the World Fellowship committee, it will be held from 3 to 5 p.m. at the Ala Wai club house.

THE LANAI and gardens of the club house will be the scene of a number of how-to-do-it-in-Hawaii demonstrations. Mrs. Agnes Makaiwi, one of Honolulu’s long-time lei sellers, will demonstrate the making of leis.

Mrs. Jubilee Logan, a teacher of Hawaiian crafts at the YWCA, and a group of friends from Laie, including Mrs. Maili Leu, will weave lauhala and assemble see and shell jewelry.

Mr. Burrows and Tony Teves, will show how to prepare coconut, while Mrs. Katherine Harbottle will make haupia (coconut pudding). Laulaus will be prepared by Mr. Teves.

MRS. AMELIA GUERRERO will make ti leaf skirts. The skill of throwing fishnets will be shown by Richmond Ellis, and his wife Elizabeth will pound taro.

TICKETS may be obtained at the door and film and photographic equipment will be available for purchase.

Mrs. E. H. Campbell III is general chairman, with Mrs. Thomas Goodbody, chairman of the world fellowship committee in charge of publicity; Mrs. Joseph Akau, posters, and Mrs. Virgil Nahl, tickets. Mrs. Takeo Kishida is in charge of refreshments, which will be served by Y-Teen members, who will also sell flower leis. 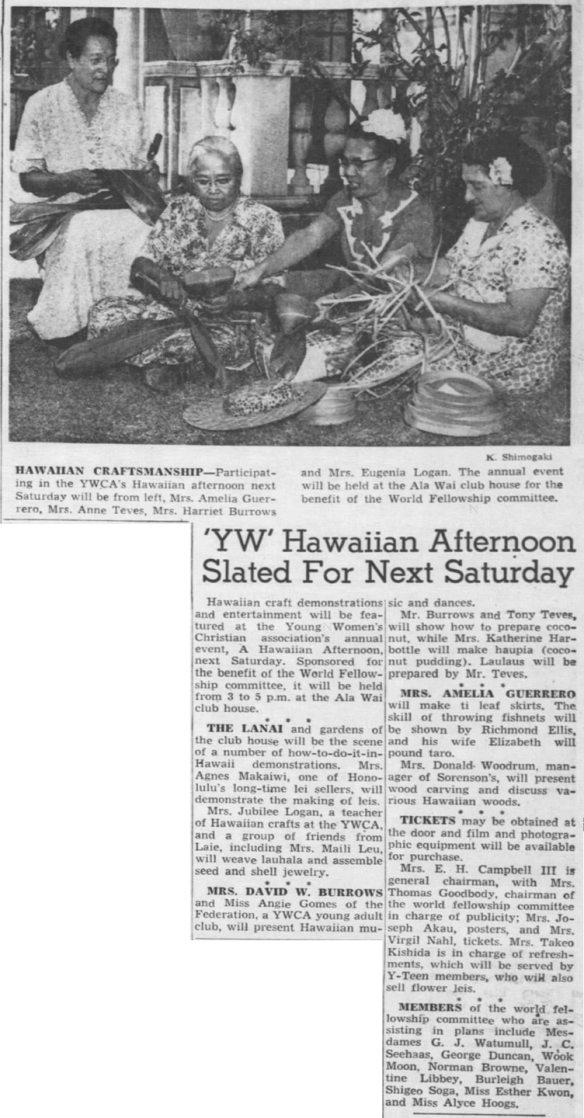