This is the first time I have written a letter to the editor of any newspaper.

Just couldn’t resist Mr. Lanakila Brandt’s invitation in his letter to you about a Hula Contest, seeking a rebuttal or an augmentive comment.

Have neither to offer, but do have a comment:

How could he or anyone question the integrity of the judges made up of Masters of the Hula, such as Mrs. Lokalia Montgomery and Miss Iolani Luahine.

In all the world you could not find more qualified people to act as judges in a Hula Contest.

By Mr. Brandt’s accusation of people of this calibre of favoritism makes me believe he acted in a manner of a poor loser, and a poor sport. Certainly hope he did not mean to be disrespectful to the Masters.

Must admit I am a newcomer in Hawaii (so far a one-year resident) and just a layman when it comes to the Hula. However, did note on the evening of the contest:

1—It took Mr. Brandt over five minutes to merely tune his guitar;

2—He used a modern guitar, and modern amplifier to portray ancient hula;

3—His playing of the guitar did not coordinate with his Hula Dancer, forcing the poor girl to improvise as much as possible to cover up his errors.

Noticed all of this as an uneducated Haole in the art of Hula. Can you imagine what the judges noticed?

I believe, Mr. Brandt, through your letter to the editor, and your performance the night of the contest, that the judges, indeed, knew what they were doing in passing you by.

Mahalo, Mr. Brandt, for your invitation to me to write this comment. 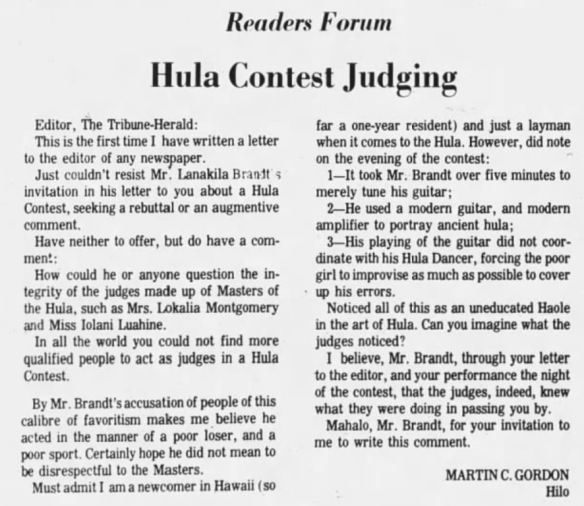