VERIFICATION OF THE TRUTH.

I hereby attest, I am the one whose name appears below; in order to verify the miraculous works of Mr. Marcus W. Lowell, and so that the public knows, he treated my wife in 1886 after she contracted the disease known as the sickness that separates families [ma’i hookaawale ohana]; he treated her and she got much better than with the doctors who treated her. She suffered for ten years from this sickness, and within a month, Mr. Lowell saved her because of his aloha he had for my wife during that time.

To attest to this, I place my name here.

I, George Campton, carpenter, have been a resident of these Islands for the last 14 years. In the last year 1891 I suffered from cancer in the leg, and through the advice of a friend I had Mr. Lowell to see it. I suffered the most excruciating pain and has confined to my bed for weeks, when Mr. Lowel saw me and told me he thought he could cure it, and to my utter astonishment, in one month from the time Mr. Lowell first saw it it was cured. It is now nearly three months since and has all the appearance of a complete cure. In three weeks from the time Mr. Lowell first saw me I was able to go about my dusiness. Any one desiring further information can call on me at 36 King St. 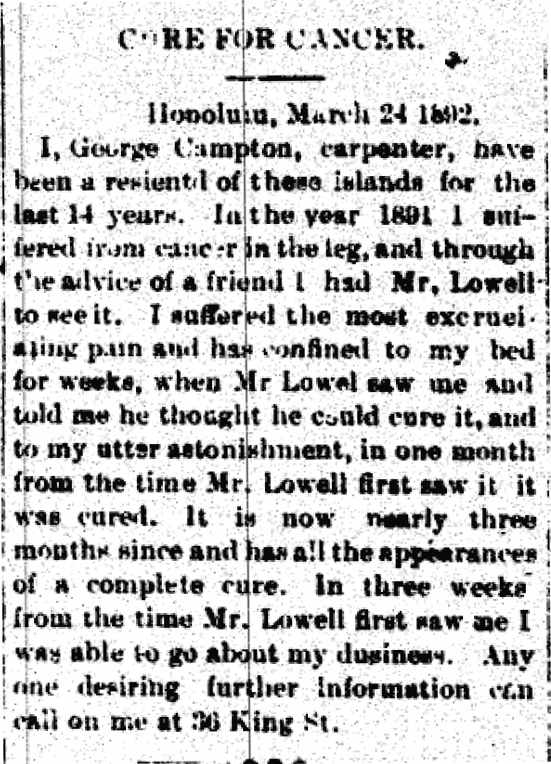