Brief History of the Wailuku Church.

The first building of the Wailuku Union Church was erected in the early part of 1867. Mr. Christopher H. Lewers, Mr. Edward H. Bailey and several others then living in Wailuku were interested in its erection, and assisted in the work. “The Friend” of a somewhat earlier date speaks of the work of the ladies of Wailuku in raising nearly $400 toward the new building.

Rev. Thomas Gardner Thurston, second son of Asa and Lucy G. Thurston, of Kailua, Hawaii, was the first pastor of this Church. He was ordained in the Kaahumanu Church, and ministered to both English-speaking and Hawaiian congregations, beginning his work in the month of October, 1866.

The Wailuku Union Church was organized, January 15th, 1867. Rev. W. P. Alexander was moderator of that council, Rev. S. E. Bishop, D. D., was the scribe. The papers of incorporation were issued the year before, on October 10th.

The first Board of Trustees of the Church was chosen as follows: Christopher H. Lewers, H. Cornwell, S. Peck. The succeeding board consisted of Samuel T. Alexander, Edward H. Bailey and T. W. Everett.

On September 13th, 1868, Rev. Mr. Thurston resigned his charge, having decided to leave the country for the Mainland. Rev. W. P. Alexander, the honored Wailuku missionary, was the next pastor of the Church. Succeeding him were Rev. D. Dole, who had previously ministered on Kauai, Rev. F. H. Robinson, Rev. N. W. Lane, Rev. D. Bissel, Rev. John M. Lewis, Re. Edward G. Beckwith, D. D. The latter preached while pastor of the Makawao Church.

Some of the interesting facts connected with the history of the Church are that, on April 4th, 1880, Mr. Edward H. Bailey united with the Church; that from that date to the time of his death, on November 5th, 1910, he faithfully served the Church in many ways, and for a time was the only living member of the organization; that for a long period Mr. C.  B. Wells served as Trustee, and Judge William A. McKay, as Treasurer; that on the first Sunday in November, 1905, the house of worship was opened after it has been closed for several years, and that at the request of many of the former attendants of the Church, Rev. Rowland B. Dodge, the Agent for the Hawaiian Board, for Maui County, was engaged to hold service.

On August 30th, 1906, those interested in reviving the organization met and voted to join the Church, on September 6th. At that time five people united on confession of faith and ten by letter.

In December, 1910, the property of the Church was condemned by the County; land and buildings were appropriated for Government use.

The work on the new edifice began in February, 1911. The Corner Stone was laid with fitting ceremonies on May 7th, 1911. The address on the occasion was delivered by Hon. Selden B. Kingsbury.

The new Church building is the result of the hard and united work of the members of the Church and the Board of Trustees, who have spent much time on the details of the structure and in raising the money. The floor plan was first worked out by the Minister of the Church, with a view to increasing the seating capacity by the use of the Sunday School rooms, when necessary. The elevation and general design of the outside of the structure, the Gothic arch, uniform throughout the building, and the truss are the result of the careful work of Mr. W. R. Patterson, who, from the very day the Board of Trustees of the Church accepted his liberal offer has put his whole heart into the work of the erection of a suitable building for the worship of the Church and congregation of which he has been a member since July 1st, 1911. The firm of Emory & Webb, of Honolulu, very generously reviewed the plans, making slight alterations in the building which have added to its beauty and usefulness; they also furnished the blueprints. Mr. Hugh Howell acted as consulting engineer, and has done faithful and efficient service.

The furniture was selected by the Minister while in New York last winter. It was purchased through the firm of Alexander & Baldwin. Mr. R. E. Smith, the New York buyer, chose the color scheme for the windows assisting the maker, Mr. Charles E. Hogeman, in the selection of the designs. The gas equipment was also secured through the same firm.

The stone for the Church was found on the fields of the Wailuku Sugar Company and in the Iao Valley. The cross was cut by Japanese workman out of a single stone from the land of Mr. and Mrs. W. H. Field in Iao. The asbestos shingles and ohia flooring were furnished by the firm of Lewers & Cooke; other materials bby the Kahului Railroad Company.

The many gifts to the Church from loving friends, the memorials yet to be added, make the building in every sense a true monument to the work of the early missionaries, their sons and daughters, and those who in noble liives have now passed from service here.

The gifts in money from people in Hawaii and away show how deep an interest many have taken in the progress of God’s Kingdom on Maui. 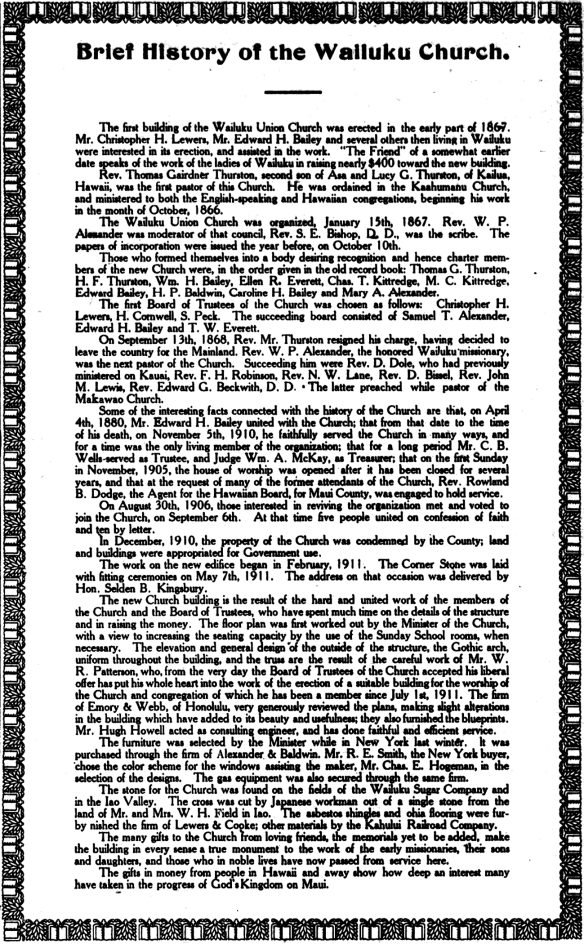