Because of the music of the boys of the Hawaiian band is constantly being of much acclaim, so to them went the jobs of entertaining parties of the haole of ours this past week. The P. G. band was not called for. They live, and do not have to eat stones. The visitors at the Hawaiian Hotel are those who want them the most.

[It was said that when the members of the Royal Hawaiian Band refused to sign an oath of allegiance to the P. G. The bandmaster Henry Berger told them they would end up eating stones… I cannot find a quote from the time. Does anyone know of one?] 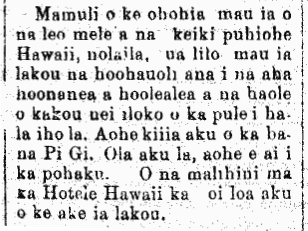