Are there underground channels from one side of the Island to the other?

Is there, Kamaainas of Waipahu, a stream which begins as Punahoolapa—the “Bright Spring”—in Kahuku, disappears and worms its way underground across the Island to reappear in your own Waipahu spring?

Tradition gives us stories of such springs. Even Mr. J. Gilbert McAllister, of the Bishop Museum, notes their possibility in his “Archaeology of Oahu.” He lists: “Site 128. Waipahu Spring, famous in tradition as the place in which the tapa mallet appeared after having been lost in Kahuku. A pump has been placed over the site.”

We have read and been told of these water holes. Some of them furnish catches of fish—but only on the nights of Kane. The story preferred, however, is the one of the disappearing tapa board. We shall give the story and our authorities and wait for the answer from you Kamaainas.

Out of hundreds of tapa boards one will be a singing board—with sounds as clear and ringing as a copper bell. Such a board was highly prized by the natives. Once upon a time, the story goes, a native living in Kahuku had a board that sang. Mr. Thrum in his annual dignifies the story with this account:

“A kapa-beating log of peculiar sound, unlike any other known on the island, which was pleased in its waters (Punahoolapa Spring in Kahuku) at the close of the Kapa-making season to keep it smooth and free from cracks that would impart an impression to the cloth of its manufacture, was missed, and believing it to have been stolen, search was made all through the Koolau, Waialua and other districts until at last it was found in use at Waipahu. Recognizing it by its resonant tone, it was claimed by the searching owner, and right thereto by those in possession was as vigorously maintained. To test the truth of ownership as claimed, the Ewa people accompanied the claimant back to Kahuku to visit the scene and witness a test of the underground stream theory.

A bundle of ti leaves were gathered, which was wrapped together and consigned to the waters of Punahoolapa. In the course of a few days they were lost to sight, whereupon the party set out for ewa, and after careful watching, as predicted the bundle of ti leaves came forth on the bosom of the waters of the Waipahu stream. The kapa log was thereupon recognized as the rightful property of the Kahuku claimant.

What is the answer? Must this be put down as another of our neo-myths? Or is the old story true? 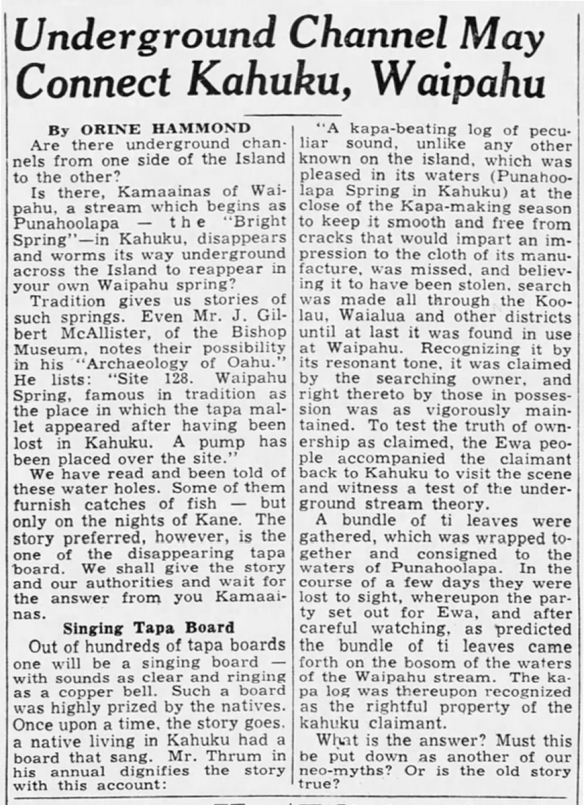