Balloon Fish Placed ‘Out of Bounds’ By Board Of Health

THE BALLOON, OR OOPUHUE FISH

The sale of puffer or balloon fish (oopuhue) has been banned by the territorial Board of Health, because of recent outbreaks of balloon fish poisoning which caused hospitalization of several persons, Dr. Richard K. C. Lee, director of public health, announced yesterday.

Dr. Lee said that, under the Hawaii Food and Cosmetic Act (1941), food ordinarily considered poisonous shall be deemed adulterated by the health board and may not be sold or offered for sale.

Although it is claimed that proper preparation of the fish may make it non-poisonous, according to studies on it, the balloon fish, generally speaking, is “very poisonous,” Dr. Lee pointed out.

Elaborating, Dr. Lee said the poison is especially abundant in the the breeding season. One investigator has found the flesh poison-free and edible in the winter, he added.

He emphasized, however, that the majority of researchers advise against eating the fish even in the winter.

Meanwhile, Vernon E. Brock, ichthyologist in charge of the Fisheries and Game division Territorial Board of Agriculture and Forestry, explained people who eat the fish have different ideas on cleaning it to get rid of the poison.

The Office of Price Administration here revealed yesterday that the fish was not sold in any great quantity and its non-appearance on the fish market would not mean a great reduction in the amount of fish food offered the public. 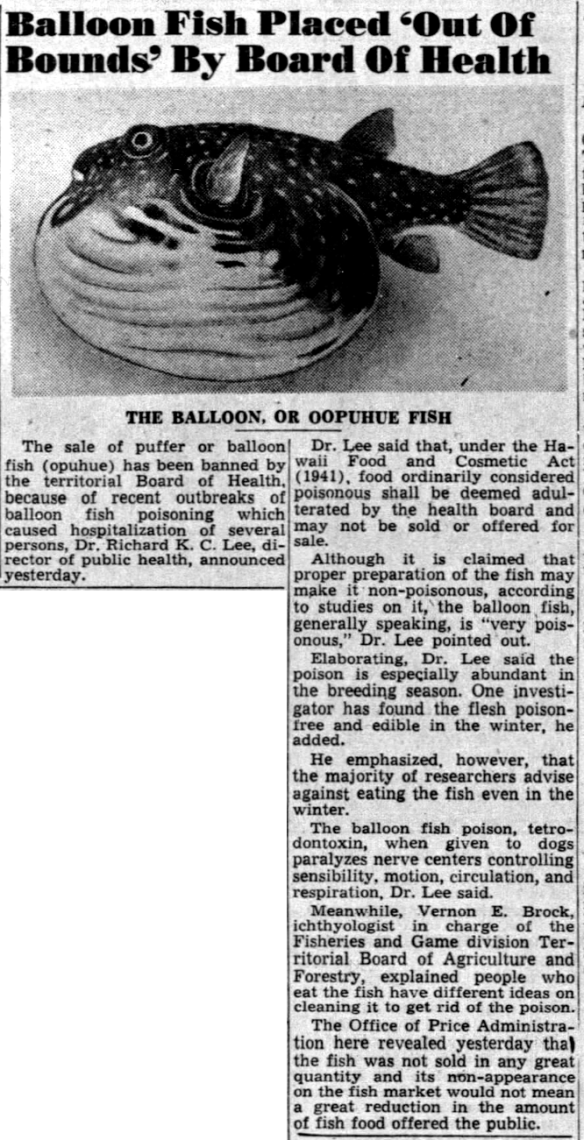