DEATH OF THE KING!

After a serious illness of five or six days, His Majesty, Kamehameha III, expired at His Palace on Friday, Dec. 15th, at fifteen minutes before 12 o’clock. He was born on the 17th of March, 1813, and was consequently forty-one years and nine months old.

This painful event was immediately made known by hoisting the Royal and National Standards at half mast, and by the firing of minute guns, corresponding with the age of his late Majesty, from Punch Bowl battery.

As soon as the news spread, the flags on shore and afloat were all set at half mast, and places of business were closed. Large numbers of people assembled near the palace and testified their grief by loud and heartfelt wailing.

At half-past 12 o’clock, His Excellency the Governor of Oahu, escorted by a company of Guards, caused the official Proclamation given below to be read, in Hawaiian and English, at the corners of the principal streets of Honolulu. The proclamation of His Majesty, Kamehameha IV, was received with shouts from the people and evident satisfaction, wherever it was made known.

Minute guns were fired by the U. S. S. St. Mary’s yesterday between 1 and 2 o’clock, and the Trincomalee was firing in like manner when we went to press.

The time for obsequies of His late Majesty has not yet been fixed upon.

[Unfortunately, the Hawaiian-Language Newspaper running at the time, Ka Nupepa Elele is not available digitally or on microfilm at this time.

The dark borders as seen here are found in newspapers when report of someone of import dies.] 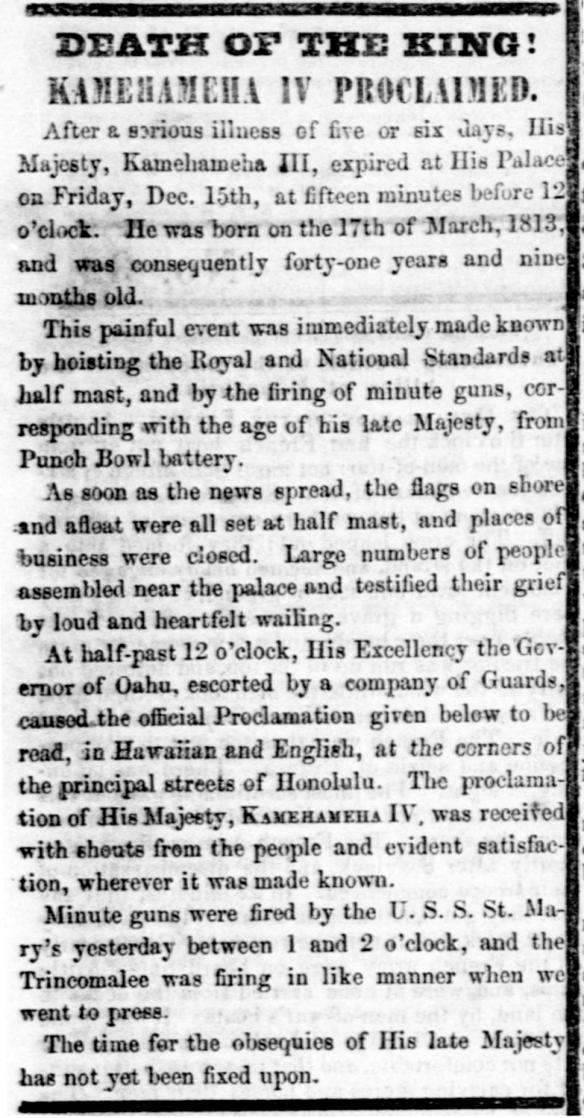