I give and bequeath to Charles R. Bishop, Esq., of Honolulu, Oahu, H. I., all my native curiosities, such as Kahilis, Calabashes, Feather capes and leis, and all and sundry the various articles belonging to me coming under the head of Hawaiian curiosities, together with the silver baptismal vase presented to me by H. M. Queen Victoria, Queen of England, on the condition that at some future day they, together with all similar articles belonging to the late Bernice Pauahi Bishop, or to Charles R. Bishop, aforesaid, be presented by him to certain parties (hereafter to be named by him), as trustees of an institution to be called the Kamehameha Museum, such museum to be under such rules and regulations as said Charles R. Bishop and the Trustees shall direct. (Signed) EMMA.

[This codicil is preceded by a note: “The following codicil to the above will was presented to the Chief Justice, but could not be admitted to probate, as there is but one witness to the signature”.] 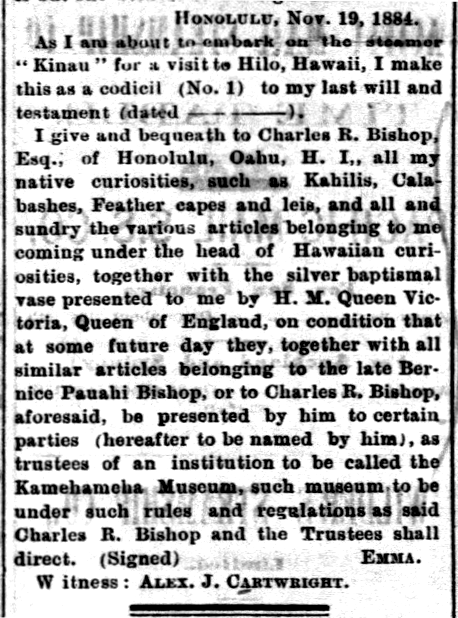