Flora Kaai Hayes, who couldn’t pass her academic course at Kamehameha School for Girls in 1913, has become one of the Bishop Museum’s most avid scholars of Hawaiiana.

Mrs. Hayes, a former seven-term member of the Territorial House of Representatives, is translating from Hawaiian the letters of King Kalakaua, Queen Kapiolani and Prince Kuhio.

“I was so mischievous that the officials at Kamehameha wouldn’t pass me fromthe academic department,” she said.

Sneaking off the campus to buy see-moi, cakes, candy and pie for her dormitory pals, who claimed they were starving from the institutional food, was one of her special pranks.

“They were much stricter in those days. I was put in the domestic science department and studied cooking and dressmaking.

“Mrs. Annie Kanahele and I volunteered as Hawaiian translators at the museum about two years ago. I wasn’t doing anything and I look for work,” the 72-year-old Mrs. Hayes said.

They have been going since then once a week to spend the day milling through the museum’s files of old clippings, letters and Hawaiian documents.

The information they translate doesn’t bring forth many unknown facts or dates in Island history but it breathes life into the study of Hawaiiana by revealing personal and charming incidents in the lives of the kings and queens, according to Mrs. Hayes.

Did the  royalty eat only taro and poi? Was money ever a problem to them? Did they worry about their image abroad?

These questions are answered in copies of her translations that Mrs. Hayes has handwritten on yellow and white papers in her studio apartment in Waikiki.

When Queen Kapiolani visited England to take part in Queen Victoria’s Jubilee Commemorative Services in London, she also visited her nephew, Prince Jonah Kuhio Kalanianaole, who was studying there at the time.

Prince Kuhio wrote to his aunt reassuring her that she was well thought of by Queen Victoria:

February 17, 1890
To Kapiolani,
We are doing well and Kawananakoa (his brother Prince David Kawananakoa) and I saw the King and Queen of England. She is so beautiful.
He asked if the Queen received your gift and he was told that she treasures it so much that she takes it everywhere she goes.
All the people here, especially the rulers want you to visit and if you do come you will be given a large reception. You were the most popular personage during the jubilee…

“Kuhio used to stay with my family in Kona. They all called him Prince Cupid probably because he was so short and plump,” Mrs. Hayes said.

She has translated a letter that Kuhio wrote to his Aunt Kapiolani that sounds similar to letters that many parents receive today from their children on allowances away at school.

May 20, 1890
London
To Kapiolani,
I have put aside my wish to go visiting because added expense but I would like to visit China on my way home after school. The studying is very hard and I will  complete my studies in six months.
The contents of bills you sent me are correct. I have told Arnis not to pay any bills unless they have our signatures…
Please do not be angry about the many bills we have made as living her is so different from home.
I received the stamp and newspapers, which I enjoyed very much.
Your loving son,
Kalanianaole

Kapiolani might have encouraged her nephews to be frugal but there was little evidence of penny-pinching in the lavish fetes she gave at Iolani Palace.

One of Mrs. Hayes’s favorite translations is a menu of a dinner Queen Kapiolani gave at the palace February 14, 1883.

There were 11 entrees. Claret and Burgundy were served with wild duck and mushrooms, pigeons wrapped in ti leaves, plover, pheasant, filet of veal, mutton and roast beef.

After a curry course served with beer, cheese and salad, port was served with  cakes, Island fruit, coffee and liqueurs.

“If I know Hawaiians, they can entertain,” Mrs. Hayes said. “Queen Kapiolani must have weighed 350 pounds.

“I learned Hawaiian from my grandparents in their little grass house in Hana,” Mrs. Hayes explained.

She was the child chosen according to the old Hawaiian custom to be raised by her grandparents. After her grandfather died she returned to her parents’ home in Kona. Her father served in the House of Nobles with King Kalakaua and helped Prince Kuhio in his campaign.

On the value of her translations she commented, “It is good for history and for the future generations to realize how important these Islands have been to other countries.

“So many things have been destroyed already. More interest should be given to the Hawaiian culture. It helps make the present stronger.”

Mrs. Flora K. Hayes explains the information in a Hawaiian letter she has translated for the  Bishop Museum by comparing it with personal mementos she has saved in a scrapbook. To the right is a koa plaque given to her while she served seven terms as a Republican member of the Territorial House of Representatives. 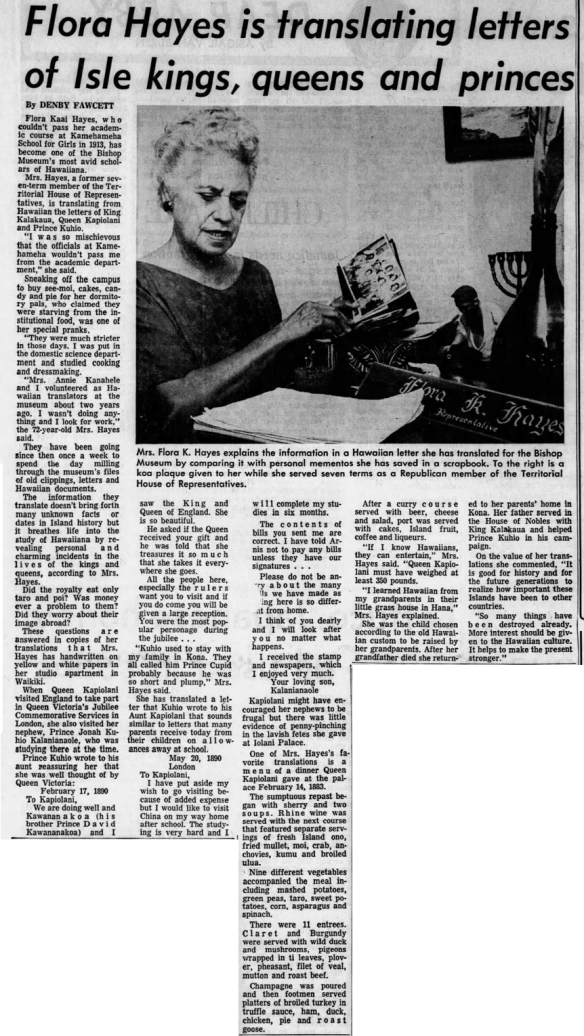