[Found under: “More British Aggression—Seizure of the Sandwich Islands.”]

All demands for proof of damages were regarded as “vexatious and inapplicable,” and the King was compelled to make a conditional cession of the islands to British Government, which he did by proclamation, as follows:

Where are you, Chiefs, People and Commons from my ancestor and people from foreign lands! END_OF_DOCUMENT_TOKEN_TO_BE_REPLACED

The First Compass in the Hawaiian Language.

“Missionaries arrived here before, here to the Hawaiian archipelago, and brought the gospel and the Christian way to guide the people to be good spiritually. But Hawaiians were not given a compass in their own mother tongue to use as a guide to steer their canoes,” according to J. R. Macaulay, the pilot who is well known in Honolulu Harbor.

And because Hawaiians lacked this, Mr. Macaulay created a compass that was marked with the Hawaiian terms for the directions as shown in the picture printed here.

According to this gentleman’s recollection, his is the first compass fashioned in the language of the land. This compass was designed with the help of Mr. J. K. Keliikahi, one of the boat pilots. And after careful adjustments, the desired results were reached, as is shown in the illustration.

For North, it is shown by its abbreviation, “A” [for akau], “He” [hema] for South, “Hi” [hikina] for East, and “K” [komohana] for West. There are 32 directional points set skillfully. And those in between the cardinal points are laid out and are written as shown below:

The black divisions are made carefully so that the compass is accurate, and within the circle in the middle of the body, you cannot fail to see the names of Capt. J. R. Macaulay and J. K. Keliikahi, the two who fashioned this first compass in the mother tongue of this land. This is one of the valuable things in the history of Hawaii’s progress. 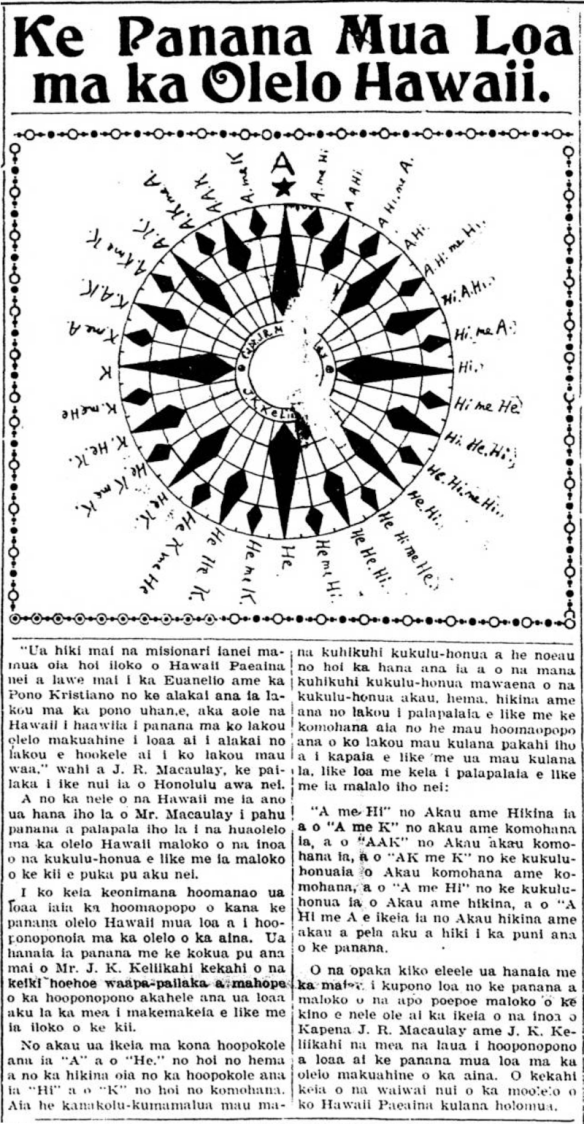 Not all kinds of huli are suitable for planting in wet patches. If the corm has been too closely cut off from the bottom of the huli and the huli itself is too small, it is not good for planting. If the taro has rotted and only a third remains good, END_OF_DOCUMENT_TOKEN_TO_BE_REPLACED

[This article is taken from the famed “Strangling Hands upon a Nation’s Throat” article by Miriam Michelson, which appears in the San Francisco Call, 9/30/1897, pp. 1–3. The introductory paragraphs go:] END_OF_DOCUMENT_TOKEN_TO_BE_REPLACED

[Has anyone seen this term in use in traditional writing, whether it be seka or keka?]

Flora Kaai Hayes, who couldn’t pass her academic course at Kamehameha School for Girls in 1913, has become one of the Bishop Museum’s most avid scholars of Hawaiiana.

Mrs. Hayes, a former seven-term member of the Territorial House of Representatives, is translating from Hawaiian the letters of King Kalakaua, Queen Kapiolani and Prince Kuhio.

“I was so mischievous that the officials at Kamehameha wouldn’t pass me fromthe academic department,” she said.

Sneaking off the campus to buy see-moi, cakes, candy and pie for her dormitory pals, who claimed they were starving from the institutional food, was one of her special pranks. END_OF_DOCUMENT_TOKEN_TO_BE_REPLACED

THE ONE THAT WAS CALLED THE MOON OF ISRAEL

THE PERSECUTION OF THE HEBREWS IN EGYPT

In times long ago, that being the period when the people of Israel were being persecuted in the land of Egypt, there appeared from the tribe of Levi, a beautiful girl of no compare, whose back was straight as a cliff and face as clear as the moon, according to the old saying, who was called Merapi, the daughter of Nathan of the tribe of Levi, and because of her feminine beauty,  and because she had a fair complexion, she was called by her people, “The Moon of Israel.” END_OF_DOCUMENT_TOKEN_TO_BE_REPLACED