On the Estate of J. Makee, the Mill, the bell house, and a portion of the Mill Boiling House, the trees, and the decorative flowers of the yard. All of these things were left barren. The grinders are standing exposed, and the quarters of the employees of J. Makee were turned over, door faced down. Some were moved; all of the houses were flooded. The sugarcane of J. Makee was pushed down by the water and the wind. The Roads and stone walls turned into nothing, for Makee and all the areas of this district. There was much damage, and the thatched houses of the Hawaiians were left scattered about. This wind on the 9th of this month began at 10 o’clock until 1/2 past 2. After the strength of the wind died down, there was a little rain. I will conclude my time with this news. It would be better if I leave the majority for another writer to talk of the majority of the news. With Aloha.

[John Kaikiohua appears to have been the Head Foreman of James Makee’s sugar plantation. This account is just one of many about the great storm’s affects on Ulupalakua, Makawao, Wailuku, and Hana, appearing in this issue of the Kuokoa.

It is interesting to see that this storm occurred 143 years ago, just one day later from Iselle!] 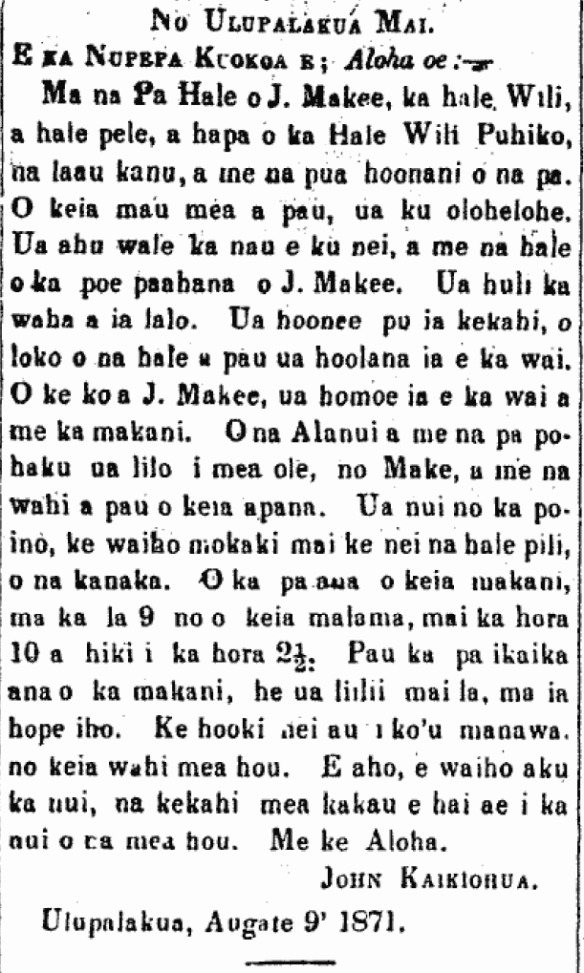 At 12:15 a. m. on July 4, the incompassionate hands of death reached out and plucked the life breath from the body of Ikuwa Purdy, as per the news received by Eben Low [Epena Low] of Honolulu. Ikuwa Purdy was 72 years old. His funeral will be held on Maui.

Ikuwa Purdy was the head cowboy at the ranch at Ulupalakua, Maui. He became the famous champion of the world in the year 1908 in roping and tying steer at Cheyenne, Wyoming [Waiomina], for speed. He roped and tied two steer at a record speed not achieved by anyone else. That record still stands and has not been broken.

Ikuwa was born in Mana, Waimea, Hawaii, and lived and worked at Parker Ranch [hui hanai holoholona o Paka] in his youth, and then with the Umikoa Ranch, Hamakua, and then he moved to Maui.

One of his proficient pupils at roping and tying cattle is William Kaniho of Waimea.

He left his wife, 9 children, and 3 grandchildren, behind grieving for him.