Before a crowd of spectators estimated to number between twelve and thirteen thousand, the football teams of Kamehameha and Sana Lui stood upon the battlefield for the championship of the year, in the afternoon of this past Saturday, on the Kamehameha School field, without there being a victor between those teams; they were tied with no score on either side.

This game between the two teams were one of the most fierce seen in Honolulu nei, filled with emotion; and there were many behind each team, and the worry of a great many spectator was relieved because neither side took the victory for themselves. END_OF_DOCUMENT_TOKEN_TO_BE_REPLACED

Football Teams of Kamehameha and St. Louis at the Game on This Past Saturday

THIS IS A PICTURE OF THE FOOTBALL GAME BETWEEN THE BOYS OF KAMEHAMEHA AND PUNAHOU ON THIS PAST SATURDAY; IT WAS ONE OF THE MOST INTENSE GAMES SEEN; THE BOYS OF PUNAHOU RAN OFF WITH THE WIN FOR THEIR SIDE, AND THE CHAMPIONSHIP FOR THAT SPORT WENT TO PUNAHOU THIS YEAR.

PUNAHOU HIGH SCHOOL’S FOOTBALL TEAM WHICH TOOK THE CHAMPIONSHIP OF 1906.

[The “O” on their uniforms hearken back to the days when Punahou was called Oahu College.] 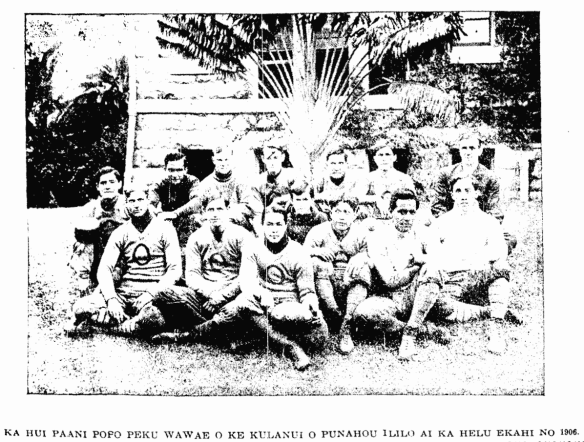 THE FOOTBALL TEAM OF THE HONOLULU HIGH SCHOOL.