In the year 1836, Mr. Peke and Kale made ready to farm silk [silika] in Koloa, Kauai, and afterwards the two were joined by Mr. Jarvis [Mi. Javisa]. They put much effort into this without caring about money spent to make it a success. They immediately planted ilima found growing here. They went to get ilima [? mulberry] seeds from China and brought back branches of the ilima lau nui from America. Mr. Peke went to the United States of America to see silk production there, and to find what it took to raise them in this archipelago; he returned without anything lacking, with the necessary gear, and sufficient workers, but the work was difficult and did not move forward. They kept at it, and some years went by, and they gave up. Many thousands of dollars was wasted on it.

Kapena and others also came with Mr. Peke, and leased other lands in Koloa, with thoughts of raising silk there. He planted ilima, built a residence, a building to raise the worms, and a house for the workers. They began the work, but in not much time, it was a bust. Here are the reasons that it was a waste of time in Koloa: there is a strong wind so the ilima does not grow well as the leaves are torn in the strong wind and wilt, the worms don’t grow well there; and the people also, they are not eager and do not keep at the work; they come some days and slack off, are lazy and leave. Today, the ilima of those silk lands are all pulled out and sugar is planted there. So sad for those foreigners who wasted their money in this endeavor. A new enterprise almost started there to make the nation rich. 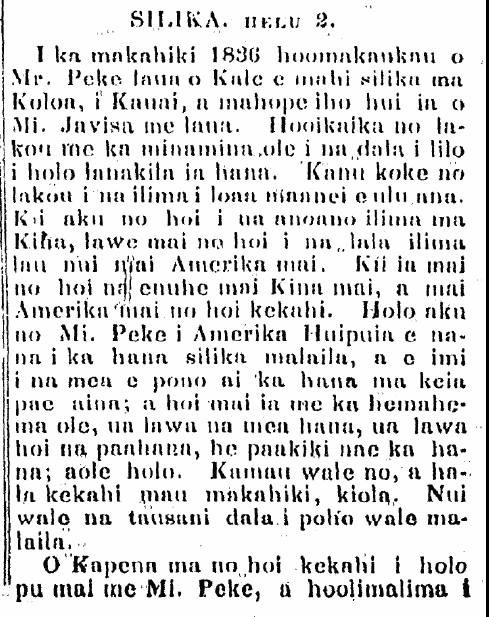 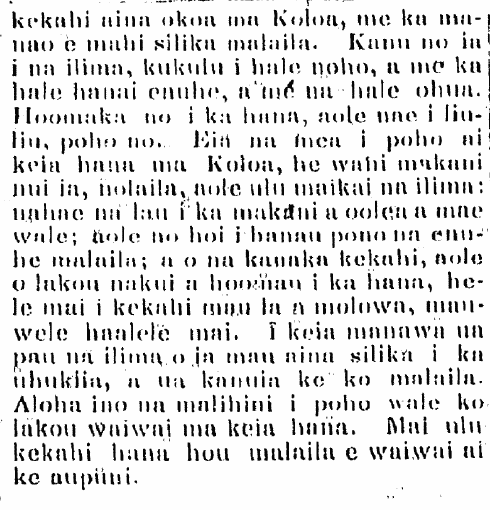