There was heavy lighting and thunder in the evening of this past Monday, and hail [hua hekili] fell in some places of Keaukaha. Some of the hailstones that the children of a haole family staying there that evening picked up were almost the size of chicken eggs. Hail broke through the shingles of a house there. 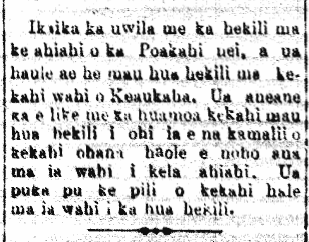 Much Snow, and cold.

O People reading the Hoku Loa. There is News seen here in Waimea; on the 15th of February, there was extreme cold; there was snow on Mauna Kea, and it almost reached its base, and there was snow atop Hualalai. It was the first time I saw snow on Hualalai in 30 years. What is this? What is it a sign of? There was also heavy rains earlier.